The well-known image, “Girl Combing Hair in Mirror” from the series shows two members of The Jokers at a Coney Island bathhouse the gang would frequent. It focuses on an unforgettable reflection of a beautiful young girl who Davidson photographed several times and portrays the close attention that adolescents pay to their appearance with all their insecurities and anxiousness. A former gang member named Bengie, commenting later on the famous image said, “Beautiful Cathy was there, always with her honey, Junior. I don’t think Cathy ever wore a bathing suit on the beach. She was always dressed in her nicely ironed clothes, and her hair and makeup were something. She was always sad, always fixing her hair.” 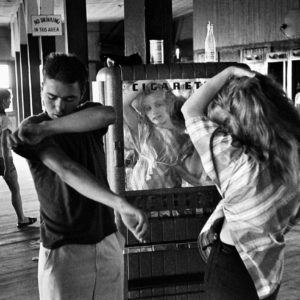