In the arena of American politics, the name Kennedy is synonymous with public service. Perhaps more importantly, the family name is renowned as one with a mythical history, full of tragedy, influence, and achievement, that has reverberated within American culture for generations. Comparable as an American equivalent to the dynasties of royal houses in Europe, the Kennedys established a presence in American politics in the late 19th century. They have maintained an active role in shaping American policy for over a hundred years, producing a President, Senators, and statesmen. 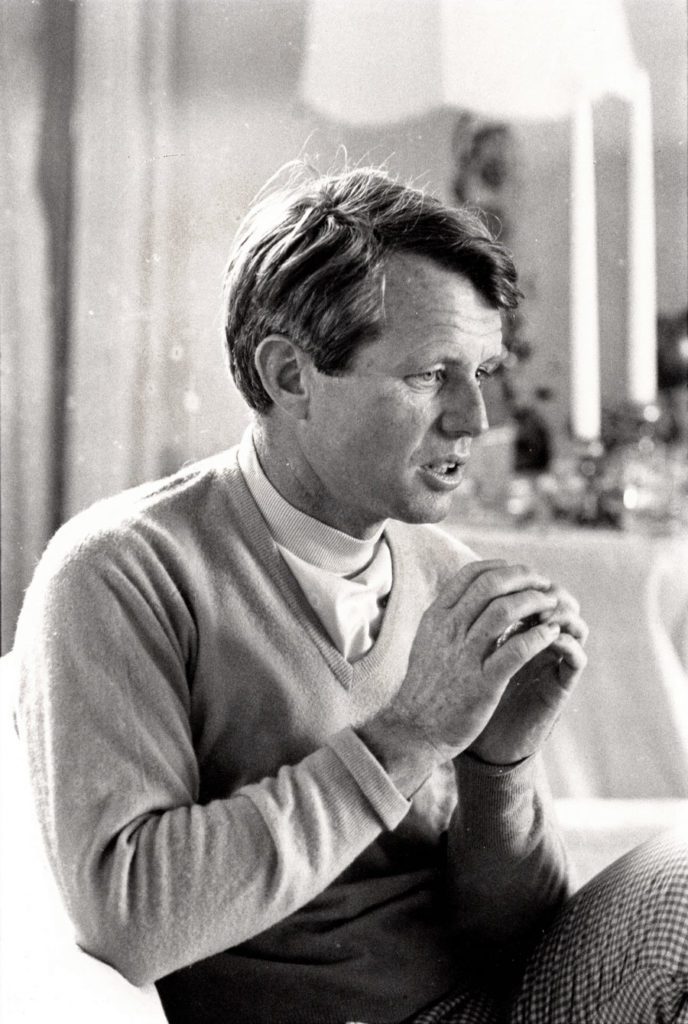 One of the most consequential political heirs of this iconic family was lawyer and statesman Robert Francis Kennedy. Remembered fondly by his nicknames R.F.K. or Bobby, Robert F. Kennedy served as United States Attorney General under his brother, President John F. Kennedy, and then served as U.S. Senator for New York. Continuing in his family’s steps by pursuing public office, he eventually campaigned for the presidency in 1968. After building a coalition from different sectors of American society and winning over the public’s confidence through heartfelt speeches and a progressive stance on complex political issues, R.F.K. grew to be hugely popular and considered one of the most prominent presidential candidates in his era. In June of 1968, after delivering a winning primary speech in California, he was fatally shot by assassin Sirhan Sirhan, marking one of the most turbulent moments in American political history. Considered a liberal icon, Robert F. Kennedy’s life cut short continues to bemuse American hearts and minds to one of America’s brilliant political prodigies.

Robert Francis “Bobby” Kennedy was born on November 20th in Brookline, Massachusetts. The seventh of nine children, Bobby, was born to successful businessman Joseph P. Kennedy and philanthropist Rose Fitzgerald Kennedy. Both hailed from established Irish American families and thus enjoyed a comfortable life of affluence. He attended the Milton Academy boarding school and later Harvard University. While at Harvard, he served in the U.S. Navy during WWII but later returned to the university and graduated with a degree in government. A few years after graduating from Harvard, he received a law degree from the University of Virginia Law School. Throughout his educational career, the Kennedy family’s dynamics and strong interest in world affairs strongly impacted the young Bobby. He recalled regularly talking politics at the dinner table.

“I can hardly remember a mealtime,” he said, “when the conversation was not dominated by what Franklin D. Roosevelt was doing or what was happening in the world.” – Robert F. Kennedy

The 1950s would be a foundational time for Robert Kennedy, where he would establish the personal and professional roots that would influence his subsequent family life and career. Robert Kennedy and Ethel Skakel married in 1950, and their family grew to include 11 children. After finishing law school at the University of Virginia, he joined the U.S. Department of Justice’s Criminal Division as an attorney. The following years would signify a series of triumphs and accomplishments for Robert’s political legacy. In the mid 50’s he served as chief counsel on the Senate’s Permanent Subcommittee on Investigations for the Democratic Minority. He traveled behind the Iron Curtain to places like Turkmenistan, Uzbekistan, and Kazakhstan with Supreme court Justice William O. Douglas. In 1957, as chief counsel to the Senate Select Committee on Improper Activities in the Labor of Management field, he helped fight the corruption of Teamster union leader Jimmy Hoffa. By 1959, he began his venture into American politics by managing his brother, John F. Kennedy’s victorious campaign for the U.S. Senate. This success helped elevate J.F.K.’s political presence to the national stage, reintroducing the Kennedy name to the general public. At the same time, a rising agent of change, Dr. Martin Luther King Jr., was arrested at a sit-in in Atlanta while waiting to be served at a restaurant. He was sentenced to four months in jail, but with the assistance of Robert Kennedy, the civil rights leader was released.

In 1961, he was sworn in as Attorney General under his brother’s presidency. That same year, he dispatched some 400 U.S. Marshals to protect Freedom Riders traveling through Birmingham, Alabama. The following year in 1962, he traveled with his wife Ethel on a multi-nation tour to promote the values of democracy. By the end of 1962 he was instrumental in helping ease the tensions over the Cuban Missile crisis, becoming a crucial part in de-escalating any nuclear conflict. Around this time, his work supporting the Civil Rights Act and the desegregation of schools cements Robert Kennedy’s role as a significant political actor in an era marked by social movements.

“Reporter: You grew up knowing that’d you never had to worry too much about money. Does that mean you could put emphasis on something else?

R.F.K.: I think so. Of course, it’s a great advantage, obviously. It was stressed in our family that because we had these tremendous advantages, which other people do not have, that, in turn, we had a responsibility to others.” Robert F. Kennedy in Bobby Kennedy for President (2018) by Dawn Porter, a documentary television series.

In 1963, Robert F. Kennedy faced one of the most challenging moments of his life and career. President John F. Kennedy was assassinated in Dallas, Texas, at the age of 46, which was a tragedy for the entire country as well as the Kennedy family. Robert Kennedy remained attorney general under the new mandate of J.F.K.’s vice president, Lyndon B. Johnson. J.F.K.’s passing had a profound impact on Robert Kennedy. Perhaps as a consequence of his grief, he resigned from his attorney general position in 1964. This same year, Robert Kennedy became instrumental in working to pass the Civil Rights Act of 1964, shaping the country for generations to come. Robert Kennedy’s principal conviction of public service to the American community lived with him even in challenging times. In 1964, he ran successfully for the U.S. Senate and became the junior Senator of New York.

“As Bobby marched up Fifth Avenue, I marched alongside him and watched as he was mobbed by adoring supporters who broke through the police lines just to touch his hand. To them he symbolized the hope for a new beginning. He instilled a belief that he could change the world. He galvanized young and old alike who were opposed to the Vietnam War. As we marched, Bobby would dive into the crowd, smiling, and shake hands with people. They all wanted to touch him.” Harry Benson, photographer. R.F.K., A Photographer’s Journal.

Working on Behalf of Impoverished Americans

As Senator, Robert Kennedy launched initiatives to combat poverty in New York and established the Bedford-Stuyvesant Restoration Corporation, a significant neighborhood revitalization program focused on improving living conditions and mitigating unemployment. The effort became one of the first community development nonprofit organizations in the country. In 1967, he visited the Mississippi Delta and witnessed abject poverty first-hand in the U.S. Moved by what he saw, he lobbied for public and governmental support to improve the living conditions of impoverished Americans. He tried to find long-term solutions to tackle poverty through the use of legislation and the encouragement of private industries to invest in these areas. His next journey to meet with United Farmworkers labor leader Cesar Chavez, who led the effort for better working conditions for farmworkers, further shaped Robert Kennedy as a statesman who would speak for the vast majority of working-class people from all backgrounds and regions in America. In 1968, he announced his candidacy for the U.S. presidency, running on a platform that opposed the war and as a socially-progressive Democrat.

“Each time a man stands up for an ideal, or acts to improve the lot of others, or strikes out against injustice, he sends forth a tiny ripple of hope, and crossing each other from a million different centers of energy and daring, those ripples build a current that can sweep down the mightiest walls of oppression and resistance.” – Robert F. Kennedy, Day of Affirmation Address

On June 5th of 1968, after a rousing winning speech following the California primary, while making his way out of the Ambassador Hotel in Los Angeles through a kitchen hallway, Robert Kennedy was shot by assassin Sirhan Sirhan. The lethal wound would end the Senator’s life the morning after. This event would mark one of the most tragic years in American history, as Dr. Martin Luther King Jr.’s assassination had occurred months earlier. After his funeral, Robert Kennedy’s casket was taken by train from New York to D.C. This event publicly displayed the American people’s grief with his death as hundreds of thousands lined the train tracks along the route. They waited to get a glimpse of the people’s hero as his body made one last journey to his resting destination.

“Kennedy drew support from lower-income whites and communities of color, from hopeful youth and disenchanted elders. Historians ponder, if he were elected, whether America might be less divided.” – Matthew Dallek

A Legacy of Hope

In retrospect, Robert Kennedy’s life shows a modern man whose particular sensibilities towards justice and his duty to serve the American people were first and foremost and made him an agent of change. An unlikely champion of the marginalized people of his era, Kennedy’s affluent background did not diminish his pursuit of fairness and virtue. He championed peace and advocated for human rights at every turn. As Attorney General, he made a name for himself fighting organized crime. For instance, he contributed to the civil rights efforts of titans like M.L.K. while also protecting the Freedom Riders in their time of need. As a Senator, he traveled from the urban ghettos of large cities to the Mississippi Delta and shed light on the poor communities within the country. Meanwhile, he opposed the Vietnam War as well as any nuclear exchange. He represented a new generation of the American citizenry where white working-class and black voters stood together, displaying an inclusive populism that was rare if not unimaginable in his era. Robert F. Kennedy, who rose through the political ranks as an attorney, whose own brother J.F.K. called him “a cop at heart,” moved from a fixation on following the word of the law to transcending racist social norms and adopting a humanitarian bent that became the basis for his political cause. With a trajectory that shifted from a mob buster to a progressive stalwart, and with a mission to improve the lives of Americans as best as he could, R.F.K. or Bobby, as affectionately called, will continue to be remembered as one of America’s great leaders in political history, leaving for posterity a legacy of hope.

Simple Pleasures: The Language of Flowers

Simple Pleasures: The Era of the Supermodel

The Iconic Life and Smile of Marilyn Monroe, 60 Years Later