With a career as legendary as his, it can be challenging to pin down what to consider as Harry Benson’s best photograph. But, for many, his most famous picture, one that captures the essence of youthful energy and the most influential band in history in a once-in-a-lifetime moment, is Benson’s Pillow Fight photograph.

Paris with the Fab Four

The year was 1964, and Harry Benson was in Paris with the Beatles. Although he wanted to report hard-hitting news stories and was, in effect, boarding a plane to cover an assignment in Uganda, the editor of his paper at The Daily Express had assigned him to photograph the then up-and-coming band at the last minute. Harry was sent to Paris instead, something he was not so thrilled about, at the time. But soon after hearing the Fab Four, his mind had changed.

“The first night, they have a gig at the Fontainebleau. As I’m walking in, and The Beatles are starting up,” Harry says, “This is the right story, I’m lucky! They were terrific. I knew this is where I should be, get as close to these people as you can.” – Harry Benson.

The band, as well as Harry, were staying at the luxurious George V hotel in Paris. Unbeknownst to Harry, the Beatles were entering an era just before the peak of Beatlemania. Prior to Harry taking the pillow fight photographs, Brian Epstein, the iconic Beatles manager of the 1960s, who had guided their rise to fame, entered the band’s hotel room and informed them that their hit single, “I Want to Hold Your Hand,” was number 1 in the US. Half an hour later, Epstein returned to the room to tell the band they were booked on the Ed Sullivan show. Beatlemania was coming to America.

“From then on, I made sure I stayed close to them. When we were in their hotel suite later, one of them said: “That was some pillow fight we had the other night.” When I suggested photographing then having another, John said: “No, we’ll look silly and childish.” Paul was having a brandy – he always ordered expensive drinks – and John crept up behind him and hit him on the head with a pillow. And then it took off” – Harry Benson. 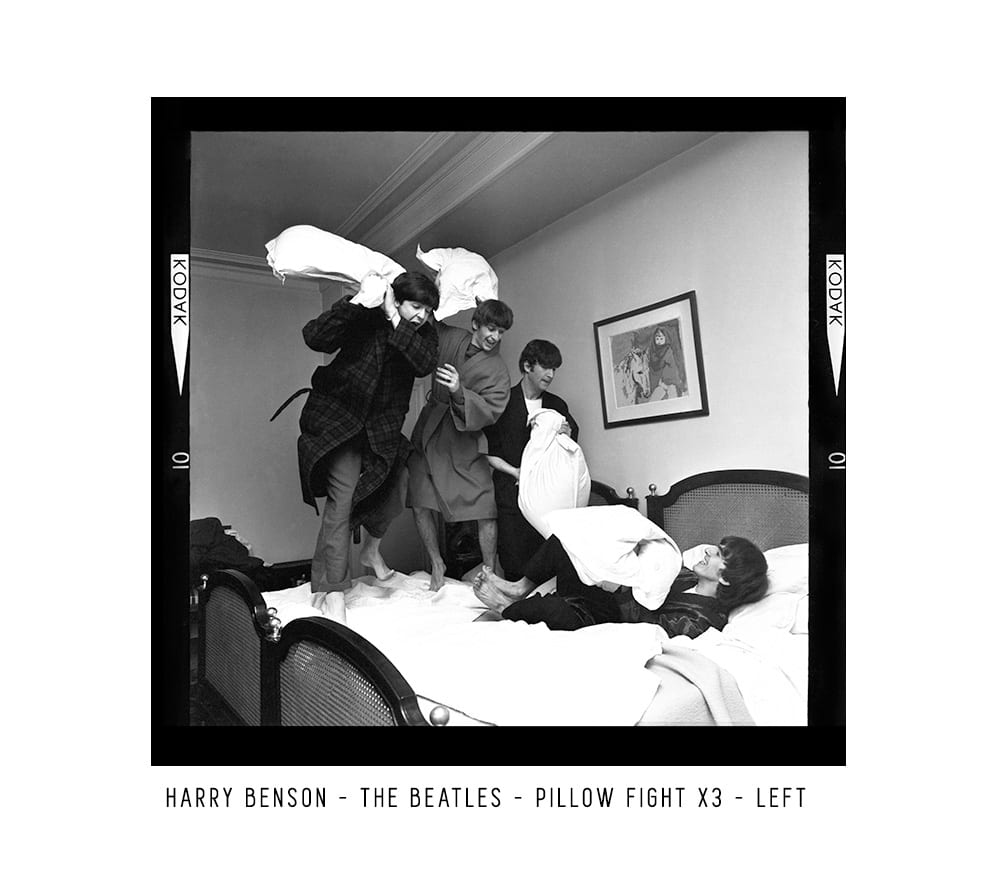 From Bathroom to Darkroom

After shooting the pillow fight roll of film, Harry went back to his hotel room. He used the bathroom as his darkroom, quickly developing the pictures to send back to London. After that night, Harry Benson would continue to collaborate with the Beatles for the next 18 months, accompanying them on the plane to their first visit to the US, to the Ed Sullivan Show, and beyond, creating a close friendship that lasts to this day. 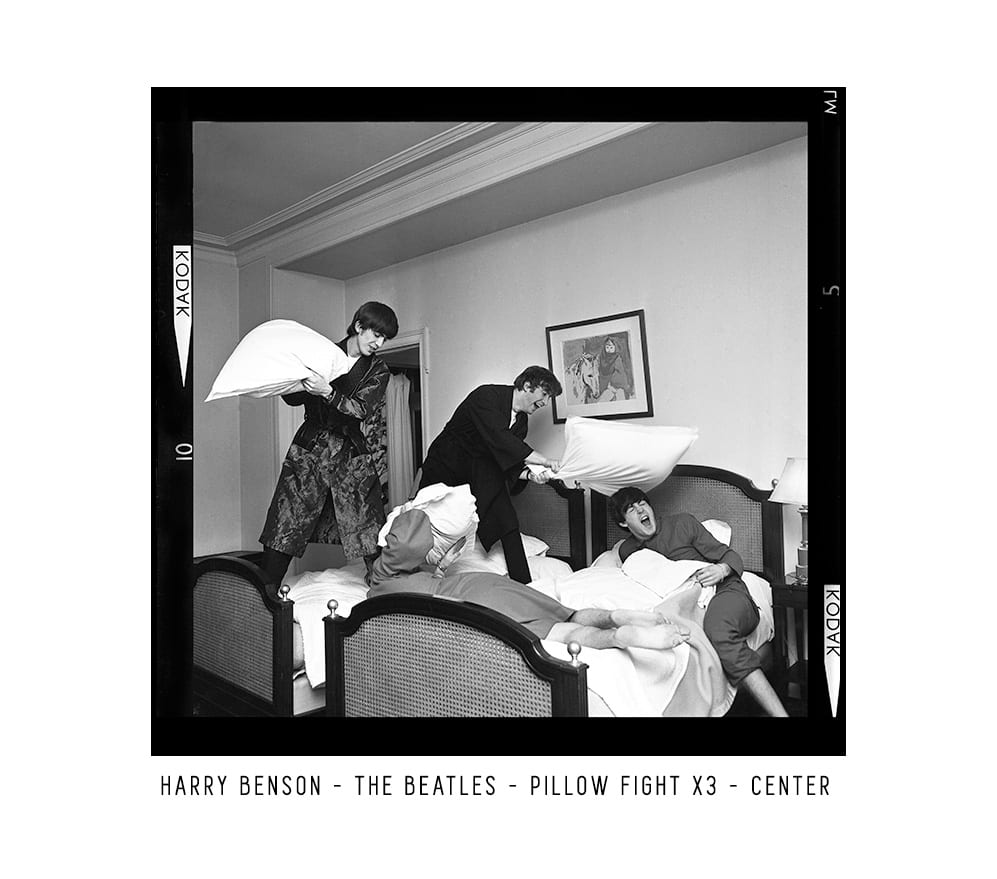 Over 60 Years of Legends

Harry Benson’s repertoire of images is nothing short of incredible. He was there when Bobby Kennedy was shot, he’s captured every president since Eisenhower, he marched with Dr. Martin Luther King Jr., and he was there for Muhammad Ali’s training at the legendary 5TH Street gym in Miami before his fight with Sonny Liston. 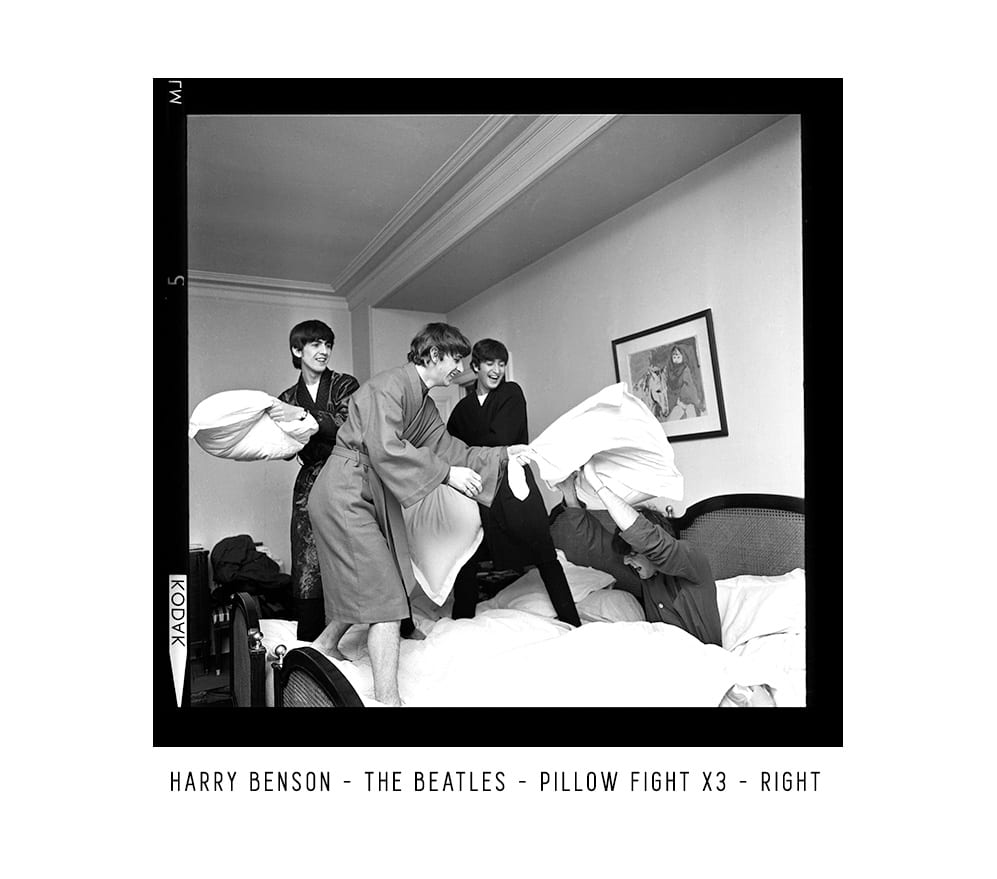 The Beatles changed music history forever. Arguably, the most influential band of the 20th century, their sound and development as artists profoundly impacted culture, their music still popular today. Fortunately for the rest of us, Harry was there to allow these moments to live forever.

“I’ve done plenty of jobs in my life, and there are many I’d like to have another go at. But this isn’t one of them. I don’t know why I did it so well. I was young, I guess.” – Harry Benson