A mystic aura of dreams and memories surrounds the poetically composed photographs of Bernard Faucon. Considered one of the pioneers of staged photography, Bernard Faucon was one of the first names to master the idea of the constructed image, and created a mise en scènes to reflect his own memories. He was born in Provence in 1950, and studied philosophy and theology in Paris at the Sorbonne University. His grandmother, Tatie, a profoundly influential figure in Faucon’s life, gave him his first art supplies as well as his first camera, encouraging Bernard to become an artist from a young age. Alluding to the idyllic, pastoral scenes from his childhood in the hillside region of Luberon, Faucon created his first pictures in 1976 by combining mannequins of children and his friends and two brothers as models. 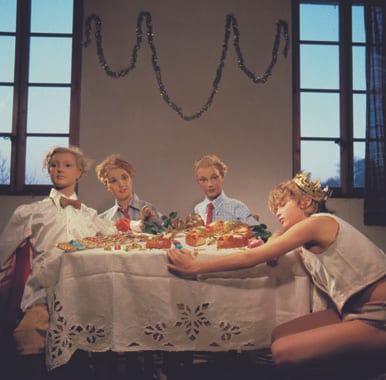 A Paradoxical Approach to Photography

The series, titled Les Grandes Vacances, were the first examples of Faucon’s staged work and subjective reality narratives and have become one the most collected series in his career. Faucon’s photographic style began evolving from then on, with frequent references to the surrealist school of photography. At a time when the medium of photography was still new to receive recognition as an art form, Faucon’s work especially stood out due to its fantastical, dreamlike and somewhat bizarre nature. Photography was believed to capture a true, unmanipulated moment in time, and had a wider emphasis on its documentative function, yet Faucon’s compositions presented scenes he had carefully styled and staged inspired by his childhood memories. Such a paradoxical approach to the medium was unique and original in the world of photography, and quickly drew international audiences. Faucon’s work was sought after in Asia, especially in Japan, as well as the US with the help of influential art dealer Leo Castelli. Faucon had the privilege of being one of the few photographers to be represented by the watershed Leo Castelli gallery.

Much like his transition from adolescence to adulthood, Bernard Faucon’s work also evolved from relying on models and mannequins to creating interior settings from his family’s cottage in Luberon, which led to the series titled Les Chambres d’Amour (Rooms of Love). Between the years 1984 through 1987, Faucon expanded on the emotive possibilities of creating metaphoric pictures which depicted richly imagined empty rooms of love and desire. According to Roland Barthes, Faucon ‘…exactly produces a tableau vivant.’, carefully arranging each element he would like to photograph.

On rare occasions, few bodies are caught asleep in the daylight (15ème chambre d’amour, 16ème chambre d’amour) whereas in other rooms the viewer is presented with natural light coming through cracked walls and colored windows, illuminating scenes of past memories. As with his other series, Les chambres d’amour is a highly personal portfolio; Faucon believes that ‘these images are the heart of his personal strategy’ and ‘…seem to reflect a desire to express his own interiority.’  He masterfully creates an atmosphere that is very much alive, although empty, which, Jean Paul Michel describes as the ‘… striking effect of a presence by the most careful staging of an absence.’  His rooms, emptied of human presence, still hold the strong sensation that perhaps ghosts or spirits are afloat, looking back at their most intimate, shared moments. These rooms of nostalgia also seem to give away no hints of time and place, alluding to one’s dreams which often appear to be equally abstract.

‘It is first of all through the treatment of light’ says Daniel Abadie, ‘the invention of a specific lighting effect which does not belong to any season or to any clearly defined time of day, that Bernard Faucon gives his images their ambiguous truth. He is a photographer and it is from light that he draws the essential elements of the means he employs.’

In the series, Faucon photographs atmospheres which transcend existence, and explore light in relation to emptiness. These compositions are metaphoric statements of states of being. They range in their moods and resonate with poetic possibilities.

Besides Faucon’s highly personal approach to the series, it is also the technique and printing method which add to the romantic quality of the images. Looking for a stable form of color printing, the pictures have been printed using the Fresson method, which is considered to be the most archival and stable of any color process used today. Founded by Theodore Henri Fresson in 1899, the technique was initially used for monochromatic prints and was later used to produce the first color carbon prints. As can be seen in Faucon’s work, Fresson printing prioritizes mood and character of the work, and is believed to be the painterliest of the printing processes. Subtle color palettes in which color separations are made from the negatives of each photograph, involve multiple printing and make the pictures look dreamlike with a glazed color. One can almost feel the weight of time that has passed. The slow nature of the Fresson technique compliments the gentle aura of Faucon’s rooms as it takes around six hours for each print to complete. This technique has been passed down within the Fresson family for four generations and, to this day, their workshop in the outskirts of Paris is the only one in the world to produce these prints.

Known for creating bodies of work that include his interest in poetry and painting, French photographer Bernard Faucon’s photographs present lyrical, captivating moments that allude to his own memories and dreams. Faucon was fascinated with the mysticism and potential behind the photograph, which inspired him to create his early works, soon gaining global recognition. His diverse, complex and highly intellectual artistic portfolio has been exhibited in major museums and galleries, and is included in the collections of Centre George Pompidou, the Bibliothèque Nationale de France, the Victoria & Albert Museum, San Francisco Museum of Modern Art. In 1989, Bernard Faucon was selected as the winner of the Grand Prix Nationale de la Photographie.

In 2005, the influential Maison Européenne de la Photographie exhibited a one-man retrospective for Bernard. In this exhibition they restaged his “cabin” in Luberon and Bernard gave the artifacts from the cabin to museum visitors. This poetically put an end-stop to the rooms of Chambres des Amour.

He stopped making photographs 25 years ago, after he felt he had exhausted the potential for creating subjective realities. His last bodies of work have been film and video productions based on memory sequences and road travel. He is considered to be one of the most creative and influential artists to work in the medium of photography. His body of printed works is very limited and most have been acquired by museums in Europe and China.