Delve into the world of Stephen Wilkes’s Day to Night series in this insightful TED Talk.

Day to Night explores using the creative possibilities of modern technology to present photography as never before. The series explores the space-time continuum within a two-dimensional photograph.

“Photography can be described as the recording of a single moment, frozen within a fraction of time. Each moment or photograph represents a tangible piece of our memories as time passes. But what if you could capture more than one moment in a photograph? What if a photograph could actually collapse time, compressing the best moments of the day and the night, seamlessly into one image?”

In this TED Talk, Stephen Wilkes lays out the origins and development of his remarkable series. Throughout the presentation, we watch Stephen Wilkes speak about the transcendent influence of the Hudson River School on his work. Wilkes recalls the origin and practical nature of merging his images. His painstakingly crafted panoramic images transcend the single moment of conventional photography. They place Wilkes as one of the most original contemporary photographers on the international scene. 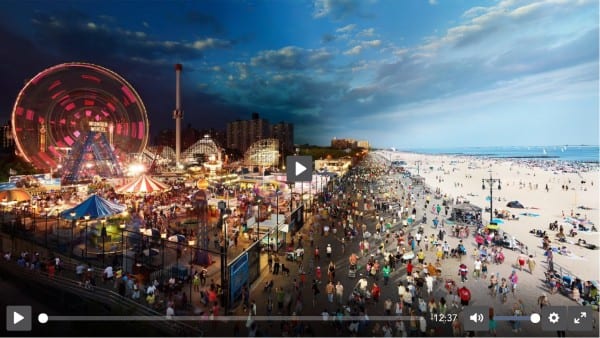 Since 1983, Wilkes has built an unprecedented body of work and a reputation as one of America’s most innovative photographers.

In 1996, Stephen Wilkes was commissioned by LIFE magazine to take a panoramic shot of the cast and crew of the film Romeo + Juliet by Baz Luhrmann. Once on location, Wilkes realized the set was square, prompting him to improvise for his shot. Influenced by studying David Hockney’s photographic collages, Wilkes decided to create a panoramic shot through different angles. Later, he physically pasted them together to form a single image. Employing this technique, he was able to capture the lead actors engaged in a hug in one shot, and kissing in the reflection of a nearby mirror in another. As a result, Stephen Wilkes begins to bend time. Wilkes can now maneuver the narrative in a way that would transform his methodology and shape a future path towards his acclaimed series.

Day to Night, Wilkes’ most defining project, began in 2009. These constructed landscapes capture the ephemeral as light passes in front of his lens over a full day.

To create the final image, Wilkes blends a curated selection of his large-format photographs captured from a fixed position, frequently 40 feet in the air, into a single picture, which can take months to complete.

Wilkes’s defining achievement as an artist has been his surpassing photography’s ability to represent the instant by coalescing time and space into an extrapolated narrative. His calculated use of modern technology, the influence of the idealized naturalism of the Hudson River School in his work, and the overcoming of a myriad of technical as well as physical challenges needed to set up locations and make thousands of exposures to create a single final image are the reasons that set Stephen Wilkes apart. His photographic body of work generates serious conversation on the future of art, technology, and the environment. Wilkes is creating work that will help redefine our understanding of the impact of photography in the 21st century.

Beyond The Horizon: The Changing Global Ecology