A Pioneer of the Post-War Period

“When people look at my pictures, I want them to feel the way they do when they want to read a line of a poem twice.”

Swiss-born photographer and filmmaker Robert Frank is one of the most influential photographers from the postwar period and onwards. Frank is renowned for creating an original and sophisticated style that pioneered the raw, snapshot aesthetic that would eventually dominate the photography genre.

In the following videos, the viewer can get a broader understanding of the photographer’s Robert Frank’s influential reach and historical impact as a seminal photographer of the 20th century.

The video, In Unseen Photos, A Clearer Picture of Robert Frank’s America by KQED Arts, profiles Robert Frank’s artistic journey through America and highlights Frank’s photography exhibition at the Cantor Art Center at Stanford University. This exhibition study is a compelling video because it provides the illuminating insight of Peter Galassi, Emeritus Curator of Photography at the Museum of Modern Art. As guest curator of the exhibition, Galassi helps guide the viewer through the historical context of Frank’s work and describes what made the photographer’s contribution to the art form so significant.

“He brilliantly developed this template, where you have one or two individuals who are trapped by pictorial forces that ends up being a very eloquent metaphor for lonely people trapped in social circumstances.” Peter Galassi, Emeritus Curator of Photography, MOMA 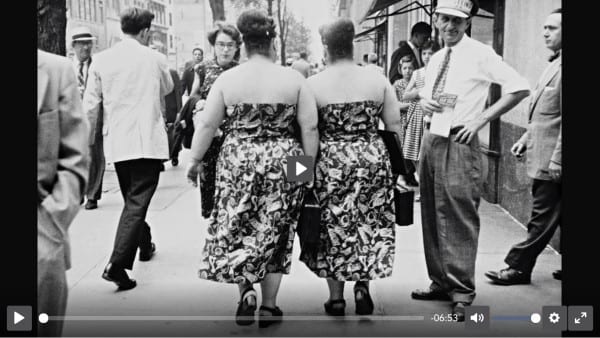 “Robert Frank as a Young Artist”

In this YouTube video made by the San Francisco Museum of Modern Art, Robert Frank speaks of his experience of moving to America and some of the actors that influenced his photography. In Robert Frank as a young artist, the photographer speaks on the importance of youth and always having his camera ready to shoot. Frank then ultimately speaks on his motivation to become well known and the influence that the friendships with Beat Generation writers Jack Kerouac and Allen Ginsberg had on him. 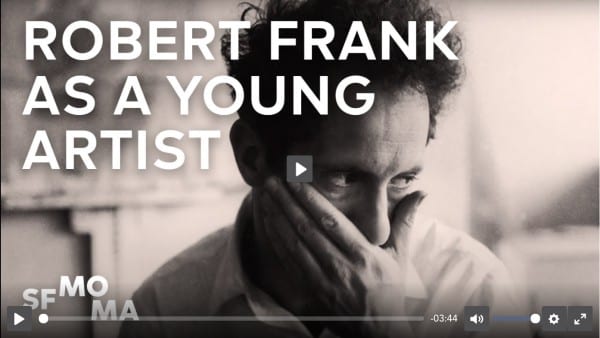 The Beginning of Frank’s Career

Robert Frank began studying photography in Swizterland in 1941. He spent the next six years working for commercial photography and graphic design studios in Zurich, Geneva, and Basel.

In 1947 he traveled to the United States, where Alexey Brodovitch hired him to make fashion photographs at Harper’s Bazaar. Although a few magazines accepted Frank’s unconventional use of the 35-millimeter Leica for fashion work, he disliked fashion photography’s limitations. He resigned a few months after he was hired. Between 1950 and 1955, he worked freelance producing photojournalism and advertising photographs for LIFE, Look, Charm, Vogue, and others. He also garnered support for his independently produced street photographs from significant figures in the New York art world. These figures included Edward Steichen, Willem de Kooning, Franz Kline, and Walker Evans, who became important American advocates of Frank’s photography.

It was Walker Evans who suggested that he apply for the Guggenheim Fellowship. This Fellowship freed him to travel throughout the country in 1955 and 1956 and make the photographs that would result in his most famous book, The Americans, first published in France as Les Américains in 1957. After its publication in America in 1959, he devoted an increasing amount of time to making films, including Pull My Daisy and Cocksucker Blues, both of which exemplify avant-garde filmmaking. Since 1970, Frank divided his time between Nova Scotia and New York.

The Americans was one of the most revolutionary volumes in the history of photography. It was also a source of controversy when it was published in the United States. Frank’s seemingly ambivalent perspective on American culture, combined with his radical departure from traditional photographic techniques polarized most Americans who saw it at the time. Artists, writers, and generally the younger generation were electrified by the photo essay, while the status quo was left bewildered. During the next decade, the qualities of his photography became touchstones for a new generation of incoming American photographers. To this day, Frank’s work continues to shape contemporary photography.

In speaking about his life and photography across America in the Robert Frank as a young artist video, the photographer reflects back saying:

“I would live amongst them, and I would be influenced by that attitude and that wish to be accepted for what they were, not to compromise. That was the word, not to compromise. Where I came from, Europe, there was no such thing. You did what you were supposed to. You find a place, and you get married, and you know. They wanted to have a different life. They wanted to live in this culture but be different. And that was a worthwhile goal to have here. To be here but to be different.”