“Fashion is an expression of the times. Elegance is something else again.”

In the video, Horst P. Horst, 1981, made available on YouTube, we are presented with a rare interview with legendary photographer Horst P. Horst. 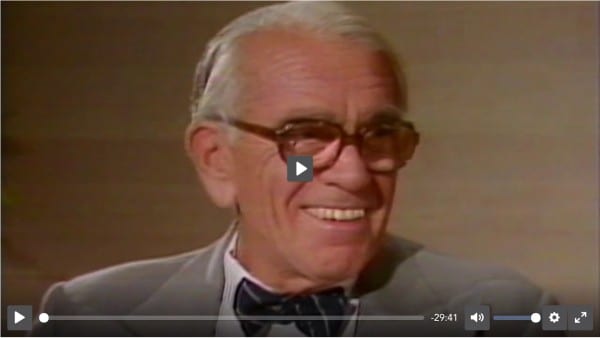 Interviewed by Barbara Lee Diamonstein-Spielvogel, Horst answers questions for the television program Visions and Images: American Photographers on Photography. Horst reminisces while recalling studying under LeCorbusier, being an assistant for Hoyningen-Huene, and working under Conde Nast. In this intriguing video, we have the privilege of hearing one of history’s greatest photographers speak about his career in his own words.

The video, Horst: Photographer of Style available on YouTube, surveys curators, magazine editors, models, and people close to Horst who speak of his extraordinary talent and the significant influence of his work. 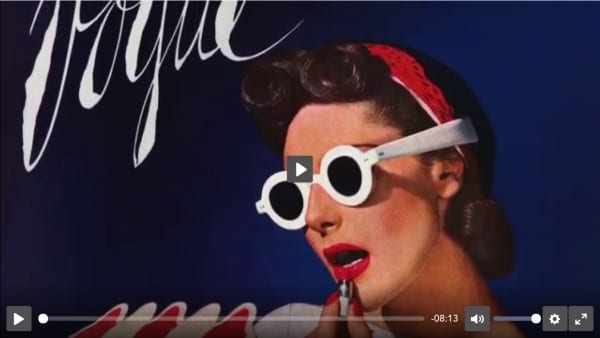 The video also explores the archives at Conde Nast, where we see prints from Horst’s 60-year career as a photographer. This video, as well as the Victoria & Albert museum retrospective, is a testament to the power and influence of Horst as a great artist.

Born Horst Paul Albert Bohrmann in 1906 Germany, Horst P. Horst studied architecture and later apprenticed with modernist icon Le Corbusier in Paris. Through his studies Horst learned the principles of design and visual organization. Horst would rely on this knowledge and use its lessons in his photography. While in Paris, he traded architecture for photography. Horst’s architecture training imbued him with patience, attention to detail, and an eye for perfection. These attributes guided him through his painstaking process of organizing photographic sessions.

Fashion photographer, George Hoyningen-Huene, who further sharpened his vision, mentored him and by 1931 he was shooting for French Vogue and then in British Vogue in 1932, thanks to art director Mehemed Agha. He incorporated the influence that modernism and surrealism had on the art world into his photographs. At that time he also photographed such celebrities as Greta Garbo, Coco Chanel, Yves Saint Laurent, Joan Crawford, and Katherine Hepburn.

In 1939, Horst made one of his most famous works, Mainbocher Corset. Shot the night he fled Europe, he packed up his equipment with many of his negatives and boarded the Normandie. After that, the German army invaded France. This photograph, that presented the back of a woman wearing an unraveling corset, is representative of the elegance and fragility of beauty in the face of destruction. It has become an icon for its beauty, mysterious sensuality, and masterful use of light, shadows, and the tonal complex range of black and white composition.

“It was the last photograph I took in Paris before the war. I left the studio at 4:00 a.m., went back to the house, picked up my bags and caught the 7:00 a.m. train to Le Havre to board the Normandie. We all felt that war was coming. Too much armament, too much talk. And you knew that whatever happened, life would be completely different after. I had found a family in Paris, and a way of life. The clothes, the books, the apartment, everything was left behind. I had left Germany, Huene had left Russia, and now we experienced the same kind of loss all over again. This photograph is peculiar – for me, it is the essence of that moment. While I was taking it, I was thinking of all that I was leaving behind.”

Living in the United States

That same year he moved to the United States and became a citizen changing his name to Horst P. Horst. He struggled to find work until he was hired by the fashion magazine Vogue. He immersed himself in the world of the New York glitterati, and, along with his fashion work, he became acclaimed for his portraits of the powerful and the famous. Horst’s fashion pictures are characterized by the elegance and sophistication of the compositions, rather than the celebrity status of the models.

A New Standard for Elegance and Style

Horst’s classic photography would establish a new standard for elegance and style beginning in the 1960s. He would continue to work at Vogue and for many other magazines, including Life. Contemporaries such as Irving Penn, Richard Avedon, Herb Ritts and Helmut Newton have all acknowledged learning from Horst. His work continues to exemplify the highest standards of perfection for both contemporary photographers and collectors to this day.