Kahn – My mother gave me a 35mm film camera when I was 13 years old. I was introduced to black and white photography and the traditional darkroom when I was in school. Directly out of high school I went to work in a commercial studio. I did advertising and portrait work before I started to take freelance assignments for lifestyle magazines.

In 1988, I started a two-year long project to compile a book on the Brandywine River. I learned black and white photography as I went along. Looking back, I realize how little I knew until then. I started work as a freelance photographer after the book was released. And I went exploring: in 1994, I went to New Mexico and set out to photograph the landscape. I remember the air being clearer than I have ever seen. The land was foreign and foreboding. I climbed the mesas overlooking the desert and sat on the top of the ridges for hours to watch the thunderstorms march across the great land. Sheets of purple rain would pour out of the giant nimbus clouds and strands of golden light would illuminate small areas in the massive landscape.

In 1995, I went to Point Lobos, California. For three days I slept on the ground near the reserve and spent all my daylight hours climbing and crawling, stepping lightly around the wild flowers to set up the tripod and record this incredible place. Later that year, I was invited to a lake in the Adirondack Mountains, New York. In the evening, the fog would settle on the water. By the time I would take my hand-made wooden rowboat out, the fog would be gently lifting. One day, in the mist of the coming morning, I came across a boat so unusual and beautiful in design that I felt compelled to photograph her (this was my image Bow of the Idem). Hours later, the serenity of the morning shot was long forgotten, but the image was still there.

I came home and didn’t know what to do with the portfolio. I did some research and learned an old recipe for sepia-toning the photographs that I had taken that day. This was the beginning of my nautical photography career.

In short, I am drawn to the sense of immediacy in photography and the ability to capture a very small moment of time and create a piece of art.

Tasini – From where does your fascination with ships and seascapes stem?

Kahn – I love the ocean. As a child, I grew up spending summer vacations by the sea and have been drawn to ocean and boats ever since. There is such a duality to the sea. One day it is calm, colorful, and inviting. The next day, it is dark, gray, and stormy. I find all the moods and changes are very stimulating, and yet at the same time, the openness and the views are relaxing. Ever since I can remember, I have been infatuated with the sea. I swam, sailed, fished and collected shells and sharks teeth that had washed up on the sand. I hid in the dunes and marveled at the treasures the water and wind revealed, then covered again. It is this constant evolution, this perpetual change that draws me to the water again and again. Heraclitus said ‘you can never step into the same river twice’. This is true for the shore: it is always in a state of flux. In this energy, I realize that I am one and the same with the ocean: calm when she is calm, exhilarated when she is exhilarated.

The sailing vessel is shaped of wood, to float on water, with sails of canvas to catch the wind, ropes of hemp and spars of spruce ballasted with stones, iron or lead, with fastenings forged of bronze. They are made from nature to work with nature. The sailing vessel is man’s answer to the sea. In his longing to traverse and transport, to expand himself, he needed a boat that could carry him across the ocean to new lands, to find out if the world was flat. The boats were primitive at first, but eventually the designs evolved to work well with nature. The designs matured to withstand the ever-moving ocean, and to harness the powers of wind, to move quickly and efficiently across vast distances. The very nature of this task inevitably led to some of the most beautiful and artistic designs that man has ever created. In order to work well in nature, and to use the power of nature, the designs were inherently beautiful. Robert N. Rose wrote, ‘Ships are the nearest things to dreams that hands have ever made.’

Not only are these ships lovely to behold, they are wonderful to be aboard; whether ghosting along on mirror like water with just a cat’s-paw of wind or charging over large trade wind swells in sapphire blue, bottomless water, sailing stirs my soul and I will never grow tired of its enchantment.

Tasini – Do you ever wish you could capture the beauty of the sea with something besides photography?

Kahn – Yes, when I learn to paint, I would capture the sea in bold strokes of oil or acrylic. Very abstract. The complete opposite from my realism in photography!

Tasini – Where does your natural ability for photography come from?

Kahn – Forty years of hard work… After completing high school in 1978, I went to work at a photographic portrait studio. The cameras we used were basic mechanical Hasselblads: solid, rugged, Swiss cameras with superb German lenses. They had no electrical components and used a square 6×6 cm film format. Occasionally we used smaller cameras, but I immediately recognized them as producing a lower quality image when it came to enlargement. We also used larger cameras, 4×5˝ and 8×10,˝ but while these large format cameras produced superior images, they were awkward and slow to use in the field.

Several years after I began my apprenticeship at the portrait studio, the owner decided to change his business model and become a commercial / advertising photographer. I learned how to shoot for advertising clients by doing product stills of food, automobiles, and jewelry, along with location work for annual reports. During this transformation, we continued to use the same larger cameras, with the addition of more powerful lighting. We switched to color transparency film for the reproduction process. Being before the digital age, we used Polaroids to fine-tune the composition and lighting. The color ‘slide’ film was very narrow in its exposure range, so we had to be extremely technical in our lighting and contrast control. Through all of this training, I became extremely confident and comfortable using these mechanical cameras, to the point that their use became second nature to me. I no longer had to think about the camera, which allowed me to use it quickly and fluidly.

Naturally, I stayed with the Hasselblads when I began filming sailing. I remember the first time I appeared at a world class sailing regatta (Antigua Classics, 1998). All of the professional photographers were using high-speed, motor driven, auto-focus, auto-exposure, 35 mm film cameras. Around that time, they were just beginning to experiment with digital cameras. They smiled at me and my gear, and I instantly felt out of place. Not long after that, they all switched to digital cameras. And at the same time, my photographs from that regatta and further years quickly gave me a foothold on the marine photography market place.

While I was using different equipment from them, I came to the market with a strong knowledge of sailing and knew when the boats looked their best. I had the finest training in film handling and printing in black and white.

Tasini – Do you, or have you ever, looked to other photographers or artists for inspiration or education?

Kahn – I studied the modern black and white masters: Ansel Adams for the technical aspects, Wynn Bullock for the creative aspects, and Rosenfeld for his sailing photographs.

Tasini – Do you think your work relates to historical photographers such as Gustav LeGray or the Pictorialists?

Kahn – I’m glad you asked because I have never heard of Gustav LeGray, and his work is stunning. Beautiful images, and I can see why you would relate the two of us. Yes, my work mirrors LeGray’s photographs closely and I can only hope to create works of art as well as he did. I can’t believe that he made these photographs in the mid-1800’s. They are timeless.

I have never equated my work to any style. I simply make my photographs. I never look back at the old photographers for inspiration; I feel that if I did, I may not create a certain image because it had already been created. On the same note, my work absolutely falls into the category of Pictorialism. I definitely take a very precise approach to the scene and then bend or mold the image to meet the interpretation of the event using historical photographic manipulation in the darkroom.

Tasini – If you weren’t a photographer, what would you be?

Kahn – I would be teaching yoga and sailing by the sea, or a pirate, a fisherman, or a beach bum.

Kahn – A deep sense of calm and serenity. I hope the images cause them to pause and remember how the ocean and sailing resonate with their inner selves. As Pablo Neruda wrote, “I need the sea because it teaches me.” 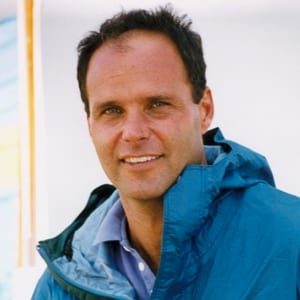 Renowned nautical and nature photographer Michael Kahn’s fascination with both sailing and photography emerged during his formative years learning to sail and experimenting with photography.

Kahn finally merged his two passions in 1995 while on a vacation to a lake in the Adirondack Mountains where he first encountered an intriguing boat that he felt compelled to photograph and on the same trip began making multiple exposures of one hundred year old boats racing around the lake.

Kahn’s photography subjects are not only reserved for tall handmade ships and prestigious yachts, but also for some of the smallest yet graceful crafts as well as the atmospheric beauty of nature that has always fascinated him. Kahn commonly uses a 1950s era medium-format camera and painstakingly handprints his images using a process he developed over many years researching and working in darkrooms. His warm, sepia toned images demonstrate his expertise as a printer as well as a photographer.

Kahn has exhibited internationally at many prominent art galleries. Major corporations such as McGraw Hill, MBNA BANK, Pottery Barn, and Ralph Lauren (London) hold Kahn’s work and MGM and Warner Brothers also use his prints in set designs for films. Kahn’s images have been showcased in prominent magazines and newspapers such as National Geographic, Architectural Digest, The New York Times, and Wall Street Journal. His most recent book is entitled, The Spirit of Sailing: A Celebration of Sea and Sail. He currently lives in Unionville, Pennsylvania and he continues to create serene and atmospheric photographs.

Avenue Antiques, Art and Design at the Armory 2013, New York

On the Water with Michael Kahn