Arrowsmith – I was a painter for three years after art school and was influenced by the Italian Renaissance and its clarity; the way light embraced the figures in the works of da Vinci and Caravaggio. Then I discovered the 10×8 camera when I became an art director out of necessity, simply to make a living. My paintings took three months to complete, while the 10×8 camera captured the moment instantly in exquisite detail. My mind was quickly absorbed with photography, which has been my never fading passion since that time.

Tasini – Do you, or have you ever, looked to other photographers or artists for inspiration or education?

Arrowsmith – I never really was interested in photography until I discovered it as an art director, and then it became my obsession. I remember Grace Coddington of British Vogue (now fashion editor of American Vogue), telling me that my work was a mixture of Penn and Avedon. I had not even seen their amazing photographs until Grace showed me. I was stunned – I wanted to leave the UK immediately and go to NYC and study with them, but Vogue was sending me commissions all the time. I was shooting for the Paris collections and French Vogue. I was going on fashion trips around the world, so I never had time to be an assistant and learn from a mentor; I was totally self-taught. Being hurled in at the deep end of fashion photography at Vogue in the UK meant I had to experiment as I went along. My five years in art school gave me the vision of light and form, so that, along with analyzing the various techniques of film and cameras, moved me deeper into my work.

Tasini – After art school you worked briefly for television and then went on to begin photographing for magazines like Vogue, Vanity Fair, and Esquire, work that launched your photographic career. Can you tell us about the process of attaining these commissions?

Arrowsmith – I worked for all these magazines at the same time I was working as an art director doing illustration for a U.K. Magazine called Town, which was like Esquire, but before Esquire started in U.K. I used to watch the world through my camera. I begged the art director of Town Magazine to let me direct a photo shoot and, eventually, he reluctantly let me photograph the Royal College of Art fashion show and it was a great success. After that I started working for an innovative British fashion magazine called Nova, then Harpers, then Vogue and so on, to the Pirelli Calendars over the decades. I have done two Pirelli calendars in succession, one of the few photographers to do so.

Tasini – How much time do you usually spend on a shoot and what is your ideal environment and type of interaction during it? Do you prefer to know the sitter in advance?

Arrowsmith – I try to shoot within the time limit until I think I have it, then once I feel I have captured the moment, I repeat the process until I get the image I want again. I do this repeatedly, discovering something new about the subject each time, until my sitter or the magazine drags me from behind the camera. Of course for me it’s never really right, just as close as I can get it. If it’s a portrait, I have to know the specific person, and I have to see an image of his or her so I can see the architecture of the face. This gives me a mental reference from which to envisage how they should be lit.

Tasini – What is your favorite thing about shooting commercial and advertising campaigns?

Arrowsmith – The best thing about big commercial shoots is the money to put amazing models or subjects in front of the camera. The camera is just a copying device, documenting the moment. With big commercial campaigns, for instance the Pirelli Calendars, one gets fantastic locations, beautiful models, and the time to shoot them. So it’s a joy to shoot commissions like these.

Tasini – Can you tell us about your ongoing Kansai Yamamoto project?

Arrowsmith – Kansai was in London for his show at the Victoria and Albert museum at the end of October. I had been to Japan to film and photograph the latest collection and his Supershow ‘Hello Tokyo’ early in 2013. I am continuing to film and photograph him and his world whenever I can. He is truly a Renaissance man of the East, always creating extraordinary pieces. He did Bowie’s costumes for Ziggy Stardust and he designs all manners of things, not just fashion. In Japan he is truly revered for his work with David Bowie and his extraordinary international ‘Supershows.’

Tasini – How do you conceptualize the portraits you take of celebrities?

Arrowsmith – If the celebrities go for my idea, that is great, but mostly I find the face and a plain background give me enough to work with; the face is such a map of expression and time. One sees through years of working that the camera is indeed a time machine preserving unique moments in time and space.

Tasini – Are there any subjects that you have had a personal history with?

Arrowsmith – Yes, the images of his Holiness the Dalai Lama and the Tibetan Lamas. Also the fashion images of Annie Schauffus, who was my muse for many years.

Tasini – How do your ideas differ from other top fashion photographers?

Arrowsmith – That’s for others to observe and comment on, I can’t say. When I first started taking pictures I longed to have my own style, and as I have progressed, the look of my work has developed. Sometimes people say to me: “I saw a picture the other day and I knew it was yours.”

Tasini – Do you work in any other medium besides photography?

Arrowsmith – As I said I was a painter, and studied in art school for six years, so that influence is always there. I am absorbed by film directing and art directing, other branches of the same tree. These provide the added bonuses of sound and music, which I adore.

Tasini – As a truly international photographer, what has been the most interesting location to shoot?

Arrowsmith – I can’t really specify one place, but I did absolutely love going to Nara (Japan) to photograph the Zen Temples, shooting the Pirelli Calendar in the desert in Almaria, working in New York in the 1970s with Grace Coddington and Annie Schauffus, and in the snow at Mont Blanc. Really, when I was there and in the moment I loved all of those places.

Tasini – Do you have certain pictures that you’d call your “favorites,” or ones that are very meaningful to you?

Arrowsmith –I have attached four pictures that mean a great deal to me. One is a picture of His Holiness the Dalai Lama with his eyes closed, a beauty shot of Annie Schauffus for Vogue, the little Italian Princes and Princess in a room playing with their toys, and a recent Kansai Yamamoto poster, as our friendship has spanned decades. These are the ones I love today, but tomorrow I will be drawn to something else.

Tasini – If you weren’t a photographer, what would you be?

Arrowsmith – A Buddhist Monk, but I haven’t got the strength, so I would have to say I would turn to painting again.

Arrowsmith – Well I only hope that they can see what I was trying to achieve in that moment. I have no expectations. 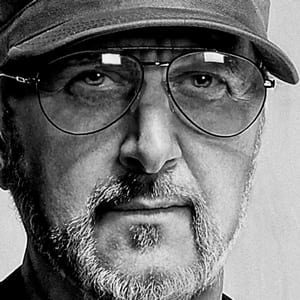 Clive Arrowsmith is a London based, celebrated international photographer. After leaving art school where he studied painting and design, he began taking photographs while working as a graphic designer for television. Leaving television to work as a photographer, he soon gained commissions in the 1970s from leading fashion magazines, most notably covers for British & French Vogue, Harpers, The Sunday Times, Vanity Fair, and Esquire U.S.A. Clive continues to work in this genre in both editorial and advertising photography and is equally known for his music and celebrity images: Paul McCartney & The Wings, Mick Jagger, George Harrison, Art Garfunkel, Penelope Tree, Definitely Leppard, Prince Charles, Michael Caine and Damien Hirst to name a few. Arrowsmith is one of only two photographers to have photographed the highly esteemed Pirelli Calendar two years in succession.

Having also worked on many major stills advertising campaigns such as De Beers, Revlon, Lexus, Hassleblad, and many others, Clive has continued to broaden his creative scope moving on to direct commercials for Heinz, Revlon, Hamlet Cigars (winner of The Silver Lion Cannes Film Festival), Rapeed Sunglasses, and music videos of artists like Lee Griffiths, Jamiroquai, Jools Holland, ZTT and Def Leppard. Clive has recently been working in Taiwan on the Free Tibet campaign with the band, Chthonic, and has also photographed His Holiness the Dalai Lama several times.

The Resurgence of Kate Bush, a Look Back at Her Photo Sessions