Harris – Over the last four decades you have photographed a wide range of subjects in various styles, so what makes an image a Watson image?

Watson – I think it all just comes back to what my training was and how it’s all finished. But one thing that is very, very important to me, and on a scale from one to ten it’s a nine and a half or a ten, is the finished product. There are so many photographers right now and they just send them out to a lab. They produce the print for them and that’s it. Maybe they approve the print or say a bit more contrast, but here we actually produce the prints in house. For me that’s a gigantic deal. Not only the technical aspect of making the print, but the aesthetics of it as well.

Harris – As a photographer who has worked with color, black and white, and toned prints during your career, is there anything in your subjects that determines which you will use?

Watson – Yes. We do gelatin silver prints, archival pigment prints, platinum prints, chromogenic, you know, quite a lot of types. Very often it’s just a spontaneous kind of reaction to it. You decide to do it a particular way and then sometimes you test it. All of them I like and they’re just different. I think you become more confident with them.

Harris – Do you utilize today’s photographic technology including digital photography, or do you only use more traditional techniques?

Watson – I do both, but the vast majority of my photography has been shot on film. Still, I embrace the new and I embrace the old.

Harris – With digital photography it can be more instantaneous that you can see the image right away during the photo shoot.

Harris – How do you think digital technology has affected younger photographers?

Watson – They think they can just fix everything later in Photoshop. I’m a bit old fashioned that I want to fix it when you take the picture. I don’t mean that you shouldn’t look on a computer, you should and we do a lot of computer work. We’re just always trying to hold onto the integrity of the original image.

Harris – I know you shoot on location quite a bit, but do you have your own studio in New York?

Harris – Going back to the 1970s you first gained acclaim for your photography after having studied graphic design and then film and television. What influence did your studies have on your work?

Harris – Okay because I saw in some of your work like “Chairman Mao” [1979] and “Monkeys with Masks” [1992] that you use repetition perhaps as a result of your graphic design training.

Watson – Yes it could be. Sometimes I’m not conscious of it because you do it automatically without thinking.

Harris – I think some of your work from the series “Shot in Vegas” could be more cinematic. What actually drew you to Las Vegas to do the series?

Watson – Yes, from the book “Strip Search” that took place in Las Vegas. I had done a book on Morocco called “Maroc,” and after I did that project I wanted to do something that was the complete opposite of Morocco. Now, of course, Las Vegas is a pop environment and Morocco is a fairly classic and traditional environment.

Harris – I know that you’ve shot in Morocco across your career, so is there something about it that keeps you coming back? What do you gain from your shoots in Morocco?

Watson – Well, I have a house in Morocco, in Marrakech. I live in three places: Connecticut, New York and also Marrakech. Anytime you shoot anything you gain something. Every day you work you get a little bit better. So “Maroc” was basically all reportage and it is all graphic and cinematic at the same time. Anytime you’re shooting you get something out of it even if you’re shooting a still-life in the studio, you still get something out of it and it changes your perception.

Watson – I’m a typical person from the Beatles generation and we were fascinated by the music, art, environment, architecture. I first lived in Los Angeles for six years and then moved to New York where I’ve been for 38 years. The effect that New York has on me is that it’s very competitive and you have to be more astute and it keeps you sharp. Also the museums and art galleries have been an influence.

Harris – You have said that an early and memorable moment in shooting fashion was going to Paris in 1976 to see the haute couture shows for American Vogue. What about this time was so memorable?

Watson – Everything is a stepping-stone and every step is something that makes you better. That was the first time I had worked for American Vogue and I eventually became more and more comfortable with it after first working for them in July 1976. I had previously worked with English Vogue and French Vogue and so on.

Harris – Speaking of Vogue, you’ve done over 100 covers for them worldwide. After doing so many covers, what keeps you fresh and where do you find new inspiration?

Watson – We’ve done a lot of covers in many different editions, but mostly for Europe, but also some American, mainly in the 1970s and early 1980s. As far as inspiration, you spend a tremendous amount of time with books, galleries, museums, and travel. So that always inspires you and other people’s work. And then if you’re passionate about photography you have that your whole life. Photographers don’t typically retire. You don’t reach 65 or 70 and get a gold watch from your company or something. Photographers just keep going.

Harris – So going back to your portraiture, what do you really try to focus on?

Watson – You’re always working with the person, you’re always talking with the person. I’m always interested in people and I’m always interested in the person in front of the camera. I do some research on the person, I know what their background is and whatever information I can get on their personal life. Sometimes of course you’ll just do a portrait of someone that you just find in the street so you’re taking a portrait of someone that you’ve known for just thirty seconds. So sometimes it’s that, sometimes it can be Jack Nicholson that you know from shooting him several times and you know who is and the movies he’s done.

Harris – You also photographed Kate Moss quite early in her career in 1993 creating some of the most iconic images of her. What do you think her lasting appeal has been?

Watson – I think two things. I think she’s interesting looking and she’s also had quite a colorful private life. She had her nineteenth birthday on that shoot in Morocco and was a good very good worker.

Harris – You have said that you think much of your fashion photography perhaps looks better years after it was shot. Could you elaborate on this idea?

Watson – If you look at some of the Irving Penn pictures from the 1950s they are fairly straightforward with a beautiful model and good makeup and hair, but the clothes make a statement and look like they’re from 1950 and not what someone walking down the street would wear today. Designers had their own style back then and it was definitively period and a bit of nostalgia creeps in. I think you should do what you do in that exact moment and if you take a picture in say 1983, than that picture should look like 1983. It takes on a slightly different perspective as it ages.

Harris – I am interested in the work you made from China right after the end of the Cultural Revolution in 1979. It was a time of great change and openness, so could you tell me about the assignment and what you experienced during the trip?

Watson – It was a project for Bloomingdales and then I stayed on. It was basically fashion ads and we brought models from New York and shot all over in Shanghai, Beijing, Guilin and so on. But after it was over I stayed on in Beijing. Basically the people were very nice and interested in us. They had never seen Westerners before so it was like you were in a fish bowl. They would just stare at you. In many parts of the country they had never seen people with blue eyes. Now it’s all different. When I was in Beijing there were no cars except for government cars and it was only bicycles. Now everyone has cars.

Harris – So would you ever want to go back there and see the changes?

Watson – I’m always interested in going back to old places, but it just depends on what you’re able to do.

Harris – What was your experience like working in Benin in 2011 for the “Cotton Made in Africa” project for the Bill Gates Foundation? Can you tell us more about the project?

Watson – It was a very interesting project. I had complete freedom and the only restriction was that all of the pictures had to be taken in Benin. I spent about 21 days there shooting and I did a lot of work. I had a large retrospective exhibition at the Deichtorhallen Museum in Hamburg that included a lot of the Benin photography.

Harris – Could you let us know what you’ve been working on lately?

Watson – Right now there are three projects we’re working on. We have a gallery show of gelatin silver prints coming up in Toronto. And we have a new book project, hopefully for next fall. I’m also working on oil paintings that compliment photography. I recently spent a month on the Isle of Skye, off of the coast of Scotland. So I’m finishing off those photographs. We’ve been working on that for about six months now.

Harris – What did you photograph there? And that’s a personal project?

Watson – Landscapes mostly. Everything that was on the island that we felt was interesting. It is a personal project, but I shot it with galleries and museums in mind. 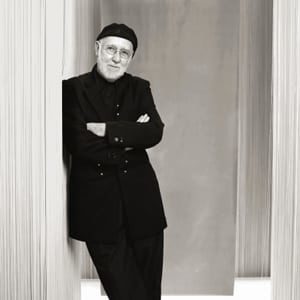 Born and raised in Edinburgh, Scotland, Albert Watson studied graphic design at the Duncan of Jordanstone College of Art and Design in Dundee, and film and television at the Royal College of Art in London. Though blind in one eye since birth, Albert studied photography as part of his curriculum. In 1970, he moved to the United States with his wife, Elizabeth, who got a job as an elementary school teacher in Los Angeles, where Albert began shooting photos, mostly as a hobby. Later that year, Albert was introduced to an art director at Max Factor, who offered him his first session, from which the company bought two shots. Albert’s distinctive style eventually caught the attention of American and European fashion magazines such as Mademoiselle, GQ and Harper’s Bazaar, and he began commuting between Los Angeles and New York. In 1976, Albert landed his first job for Vogue, and his move to New York in the same year shifted his career into high gear. Despite the enormous stress from all of his commissioned assignments, Albert devotes much of his time to extensive personal projects, and he has published three books, “Cyclops” (1994) and “Maroc” (1998), and “Shot in Vegas” (2007). In addition, many catalogs of Albert’s photographs have been published in conjunction with museum and gallery shows around the world. The archives at his studio in Manhattan’s West Village are filled with millions of images and negatives, on which world-famous magazines and companies can be read. Watson has taught a master class and spoken about his career all over the country, including at Adobe MAX 2018.

The Lens Gazes Back: Reflections in Black and White on Classic Beauty