View cart “Detian Falls, China, Day to Night” has been added to your cart.
← PREV
NEXT →

In 2014, Stephen Wilkes spent 26 hours on a platform situated at a 45 degree angle, tethered to the side of a mountain in Yosemite National Park to photograph “Tunnel View,” where Bridalveil Fall meets the granite cliffs of El Capitan. Noted as the most challenging setup he has had yet, Stephen Wilkes stated, “Once I get infected, the sheer beauty of what I’m doing overtakes everything. Whatever my fear is, once I see the scene through the lens, everything changes. I become disconnected from whatever the physical reality is.”

The inspiration for this photograph came from the painting by Albert Bierstadt entitled, “Yosemite Valley.” Scanning the photograph from right to left, the viewer can see the transition from dawn to dusk as the purple sky of morning meets the brilliant light of day that strikes the trees lining the valley. As the viewer’s gaze moves left, the moonlight subtly hits El Capitan just before the evening rain begins. The spectators who traveled to revel at the grandiose Tunnel View have become subjects in an in depth vision of humanity. By compressing time into a single moment, Wilkes is able to create a multitude of new human interactions within natural and urban landscapes and successfully captures how the color of light changes every hour. 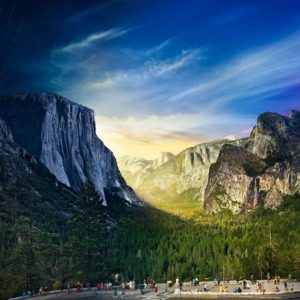