Signed, titled and dated on verso.

For over sixty years Sabine Weiss’s name has been synonymous with the influential era of French Humanist photography of the 1950s and 1960s. A rare woman in the male dominated field, this living legend’s images speak of a postwar era when a feeling of hope and appreciation for the little joys of life could be felt in the people of Western Europe’s cafes, squares, and streets. Weiss would poetically photograph individuals going about their daily lives capturing their emotions and creating a style that combined spontaneity and informality, backed by a photographer’s intuition. Originally from Switzerland, she moved to Paris in 1946 where she first assisted and learned from fashion photographer Willy Maywald, but her meeting with photographer Robert Doisneau in 1952 at Vogue was most decisive. This led her to join the influential Rapho press agency that would exhibit her work while also signing a nine-year contract as a Vogue photographer. Editors appreciated Weiss’s boundless energy and her technical ability to cover a multitude of subjects although her permanent focus on humanity in which she would combine everyday poetry with sharp social observation cemented her lasting reputation.

Throughout Weiss’s career she has been concerned with backlighting and the atmospheric effects it can create on her subjects often shooting in lowlight to create shadows and silhouettes. In the acclaimed image, “Naples” taken in 1955, Weiss demonstrates her highly attuned sense of light and ability to intuitively capture the “decisive moment” when all harmoniously unites for a split second within the camera lens. Central to the image is the brilliant firecracker appearing almost as a torch in the man’s hand billowing smoke off into the night as sparks cascade out and down across the sidewalk. In the foreground, a bicycle speeds dynamically across the Italian street scene while serendipitously backlit by the vivid light in the exact instance the image was captured. A sense of physical motion and the fleeting nature of time transpire in the moody night scene. Also in 1955, Edward Steichen chose three of Weiss’s photographs for the seminal photography exhibition, “The Family of Man,” at the Museum of Modern Art in New York.

During the following decades she would travel the world and publish a large number of reports in such magazines as Time, Newsweek, and Life later becoming a Knight of the Arts and Literature in 1987 and an Officer of the Arts and Literature in 1999, both in France. In an era when young photographers are looking for larger-than-life subjects, Weiss reminds us that life’s daily moments are enduring and timeless when seen through her uniquely optimistic and joyful eyes. 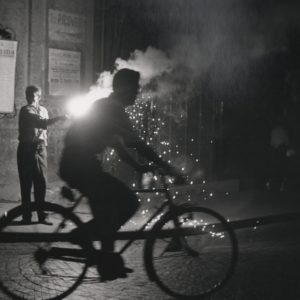