Signed, titled and dated on verso.

For over sixty years, Sabine Weiss’s name has been synonymous with the seminal era of French Humanist photography. A living legend, Weiss’s images from 1950s Paris speak of a postwar time when a feeling of hope and joie de vivre could be felt in the people populating the city’s cafes, squares, streets, and in all corners throughout Paris. Weiss would photograph individuals going about their daily lives capturing their emotions and creating a style that combined spontaneity and informality, backed by photographer’s intuition and knack for seeing and celebrating the simple joys of life.

Originally from Switzerland, Weiss moved to Paris in 1946 where she first assisted fashion photographer Willy Maywald learning much about composition and the technical aspects of photography. Her meeting with Robert Doisneau in 1952 in the offices of Vogue was decisive, as it led her to join the influential Rapho agency that would exhibit her work and she signed a nine-year contract as a Vogue photographer. During that period she would develop her permanent focus on humanity, making her one of the few reportage photographers whose work combined everyday poetry with sharp social observation. As she has said: “I take photographs to hold on to the ephemeral, capture chance, keep an image of something that will disappear: gestures, attitudes, objects that are reminders of our brief lives. The camera picks them up and freezes them at the very moment that they disappear. I love this constant dialogue between myself, my camera, and my subject, which is what differentiates me from certain other photographers.”

Throughout Weiss’s career, she has been concerned with natural backlighting and the atmospheric effects it can create on her subjects within images. For Weiss, it is the light itself that explains her subject.

In the image “Sortie de metro, Paris,” from 1955, two figures in a cavernous space hastily flee upward via stairs while they are enveloped in a strong light reminiscent of a theater spotlight. The light almost seems to beckon the two people upward towards its source while casting lively shadows into the subterranean world below. Weiss’s image shows the transition between the worlds of the Paris Metro’s darkened corridors and the world of illuminated openness above. The image expresses this contrast, the transition in light and space that people would go through during their daily lives in Paris.

In 1955, the same year that the image “Sortie de metro, Paris” was captured, Edward Steichen chose three of Weiss’s photographs for the seminal photography exhibition, “The Family of Man,” at the Museum of Modern Art. The connection with people through her camera would remain apparent in her work during the following decades in which she would travel the world and publish a large number of reports in such magazines as Time, Newsweek, and Life later becoming a Knight of the Arts and Literature in 1987 and an Officer of the Arts and Literature in 1999. She has had multiple one-person museum exhibitions, celebrating her work in the last 5 years, including one at the prestigious, “Maison Europeenee de la Photographie.” Today Weiss continues to present her images of humanity and the inherent beauty in daily life to an international audience. 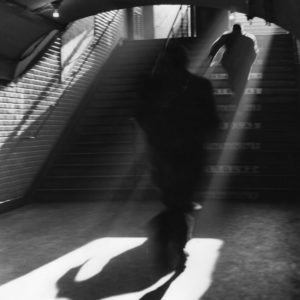