View cart “Hollywood Theater, Havana” has been added to your cart.
← PREV
NEXT →

In “Isabella’s Two Chairs with Laundry, 2000,” Michael Eastman engages in a visual relationship with private space. Here, the photographer creates a portrait of a home, revisiting the same residence years later. The title reveals the importance Isabella, the owner of the property, has as the main protagonist; the picture is profiling her inner world, recording and dissecting the physical extensions of her life. The photograph presents a private space with a perplexing dichotomy.

“Isabella’s Two Chairs, 1999, was one of the first interiors I made in Cuba of this woman named Isabella, very strong photograph…When I went back, I went right back to the same place to look at and to see Isabella’s. Isabella had died a month after I was there, she was not well, and her niece took over the house and there was an energy in there, there hadn’t been before. I noticed that the chandelier even, there were more crystals on it than before and when you look really close at the chandelier you’ll see that those additional crystals were put on by Isabella’s niece using the ties from grocery bags and stuff… Then, I went back in 2010, and it had been renovated. It was owned by the state of Cuba. All the charm and warmth, patina was gone.” – Michael Eastman 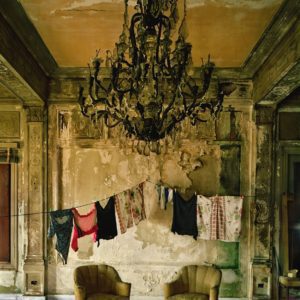