Signed, titled, dated and numbered from edition of 5 on certificate of authenticity.

Karen Knorr can be viewed as both a conceptual photographer and a practitioner of Magical Realism. Knorr’s work presents a visualization of the symbolism of parables and mythologies. She investigates the power of imagery. Her use of animals in her pictures is something that has become a kind of signature style of hers. She photographs, with a large format camera, architectural interiors and animals separately, joining them with digital technology in post-production. The animals have a mystery and an allegorical component that become anthropomorphic. While she presents the denotative facade of each location populated by elements from the animal world, she is far more interested in the connotative elements in her finished pictures. She is aware of the history of these aristocratic interiors and institutions and selects locations that are culturally complex and refined. Her pictures call into question our assumptions of reality and how we live in and use domestic spaces, as well as how we relate to the greater world of nature. Her photographs create visually complex, rich and seductive open-ended narratives.

In, The Winds of Change, Villa Farnese, Caprarola (Metamorphoses), Knorr captures the Italian heritage that the Villa represents. Villa Farnese, Caprarola, is regarded as one of the finest examples of Renaissance architecture in Italy and symbolizes an expression of power by an influential Italian family. The photograph uses the interior space of the Scala Regia (Royal Staircase), presenting a captivating interior with stunning frescoes that reveals a familiarity with the power and drama of the chiaroscuro; In this picture, the surrounding space is dimly lit while the main figure, a leopard, is illuminated as a precious object inside an architectural niche, heightening the emotion of the picture.

Using influence from the genre of Singerie, in which monkeys act as humans in art, the animal in the photograph becomes an enigmatic character that references mythology. The appearance of wild animals in aristocratic spaces is a rather surreal disassociation from their normal location as they are placed in these perfectly organized environments. The spontaneous movements of the animals in their natural habitat are incompatible with their present locations. The composite pictures speak of an older civilization dying out; the sets with a grand, aristocratic aura are specifically chosen to suggest that the older “elitist” society is becoming an anachronism. Knorr uses these historical settings to examine the ancestry and longevity of European culture.

The constructed image represents a changing time in the European cultural landscape, as Knorr wrote: “Metamorphoses, a new series in progress explores Italian legacy in Europe using Ovid’s Metamorphoses as frame in which to consider heritage and mutability in today’s Europe. Pagan stories overlap with Christian ones, as an anxious response to recent global migrations that may transform the remnants of old Europe into a pluralistic dynamic federation or a closed fortress.”

Villa Farnese, Caprarola was designed as a fortified stronghold or Rocca and sits commanding the scenery from above the town of Caprarola, and perhaps, used as a symbolism for the entry into European society. The Rocca and the leopard set the photograph’s conversation on migration and the fluidity of culture while simultaneously presenting us with the predicament that as animals, we all have desires that are constrained within the cultures we inhabit. The narrative creates a surreal, dream-like finished image with complex disassociations. When placed in this context, the leopard in Villa Farnese speaks to the lack of spontaneity that is not permitted by these formal and historically “frozen” settings. The animals are a sharp contrast to the material wealth of society and suggest a re-evaluating of over-civilized spaces. The ultimate question might be, what we have given up for the sake of civilization? The work offers a surreal serenity, the leopard’s sovereign form signifies an inherent power and strength. But in the end, the leopard is frozen in time just as Villa Farnese. We gaze at the grace and grandeur of an environment that cannot support spontaneous life and curtails individual freedoms. The Winds of Change brings an expectation that something might develop; the opulent structures wait, as they may always have, to transcend their own antiquity. Knorr’s photographs, taken as a whole, are part real, part imagined, and part dream. They have a beauty, a power and a mystery that makes them captivating.

“It’s playful, again, I take artistic license…I want an intense visual effect and I want people to be curious… I want to use the beauty of the image to seduce people to make them think and be curious about what I am representing…” 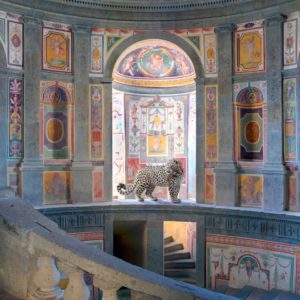