View cart “Hands, Hands” has been added to your cart.
← PREV
NEXT →

Edition 1/10. Certificate of the authenticity to accompany photograph.

Horst P. Horst spent his youth in Germany. Educated in the arts, he left for Paris in 1930 where he apprenticed for Le Corbusier. There, he met photographer George Hoyningen-Huene from whom he learned the craft of photography, and later became his assistant at French Vogue.

Horst, fleeing the war, moved to New York in 1939, just 4 years after Eastman Kodak invented Kodachrome color film. Always trying to expand on the potential of the expressive power of color, Horst P. Horst seized the moment to translate his dignified photographic aesthetic into dynamic masterpieces reminiscent of what could be achieved by painting. Innovation was key in a post World War II society and the United States was the new epicenter of fashion. With the pages of Vogue finally illuminating with color, and pioneering new techniques in printing, Condé Nast was allowing Horst and his contemporaries to revolutionize the medium of fashion photography for his avant garde publication.

Horst’s black and white imagery, always taken in a studio and packed with atmospheric illusion, evoke sentiments closely related to the surrealist movement of the 1920s. His studio transformed daily, the setting decorated with furniture, plaster casts of antique sculpture, and photographic enlargements of paintings by the likes of Jean-Honoré Fragonard and Francisco Goya.

In 1939, Horst took a photo of Helen Bennett in an ensemble by Bergdorf Goodman and jewelry by Olga Tritt. Bennett, known for her blonde coiffure and refined beauty, was an American actress and a favored model by not only Horst but George Hoyningen-Huene, Irving Penn, and John Rawlings. The photograph is comprised of brilliant reds, blues, and yellows, and the setting is decorated with what looks like an oversized umbrella and vintage beach mat, creating an overall nautical theme in the studio. The spotlight focuses directly on Bennett’s face producing the perfect variation of light and dark, and one of Horst’s seminal shadows against the white wall. The photograph expertly defines the subtle sophistication that was eminent of that time in fashion and culture.

Rarely do we see vintage color photographs printed large-scale, and none were available during Horst’s lifetime. Using a dye-transfer process, converting black and white photographs to color, a limited number of color photographs were printed, but never like we see them today. Color capture, in its beginning stages, took place on a transparency, which was plated and printed directly onto the magazine page without the need to produce a photographic print. This color enlargement, along with a small group of Vogue covers, with permission from the Horst estate, were printed to be exhibited at the Victoria and Albert Museum in the retrospective, “Horst: Photographer of Style.”

With an eye for elegance, skillfully combining the surreal and modernism, and borrowing from baroque, Horst created immortal images that have graced over 90 covers of Vogue. The chiaroscuro effects within his photographs, produced with the use of dramatic lighting, and a well-balanced composition are key elements that define Horst’s imagery and are brilliantly represented in this photograph; an image that transcends both fashion and time. 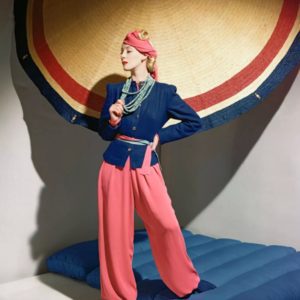