Signed, titled and dated in pencil on verso. Artist blind stamp on recto.

In the early decades of the twentieth century, Hollywood films disseminated new ideals of beauty, which the cosmetics industry grew rapidly to fulfill. In 1920 there were 5,000 beauty parlors in America, but by 1930 that figure had risen to 40,000. Women’s magazines featured articles on the most impressive innovations in age-defying treatments.

Advertisements by companies including Helena Rubinstein, Elizabeth Arden, Klytia and Caron suggested that miraculous therapies could be experienced inside their luxurious professional salons, and that the secret to eternal youth might be found in the creams and lotions they manufactured. Photographs illustrated French Vogue articles that extolled the transformative power of modern beauty machines.

Horst’s Electric Beauty was perhaps intended as a satirical comment on the increasingly extreme beauty treatments of the 1930s, and the futility of such preoccupations at a time when the world was on the brink of war. The spot-lit model is seated next to a table filled with beauty instruments and appears to be undergoing several modern procedures simultaneously. The mask she wears renders her blind to her own bizarre appearance and unaware that she is dangerously close to being electrocuted, while its wires seem to hint at a possible strangulation. Indeed, it could be argued that he composed his photograph to serve as a caution against the vice of vanity.

Between 1936 and 1943 Horst produced numerous photographs infused with a sense of the surreal, including still lifes, fashion studies and beauty pictures, but none match Electric Beauty for its fusion of wit, menace and foreboding. – Adapted from “Horst Photographer of Style” by Susanna Brown 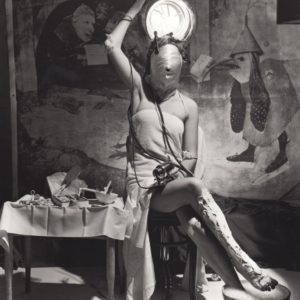