Horst P. Horst became a seminal figure in the history of 20th century photography during an innovative career that spanned over half a century. Born in Germany in 1906, Horst shot for French Vogue magazine of the 1930s and 1940s becoming well known for his chic and pioneering fashion images that appeared in France, Britain, and the United States. He was an arbiter of taste with an instinctive sense of sophistication and an elegant aesthetic who captured the essence of his subject with a sculptor’s sensitivity to form and light. Modernizing fashion photography, his images uniquely encapsulated the period by also portraying its luminaries including Helen Bennett, Andy Warhol, Gertrude Stein, Iman, Marlene Dietrich, Yves Saint Laurent, Nina de Voogh and the most celebrated fashion figure of the time, Coco Chanel.

As Horst said, “For years she had firmly refused to allow her dresses to be photographed, let alone herself, for Vogue. But one day in 1937, to the frank astonishment of Vogue’s Paris office, she sent word that she would consent to be photographed – on one condition: that I should be the photographer.”

Although the session was in Horst’s words, “a flop,” a second private sitting resulted in a profile portrait that remained Chanel’s favorite throughout her life. Horst said about the second session: “This time she wasn’t preoccupied with the photograph; she was thinking about a love affair with Iribe that was ending. You can see that she’s not paying attention to anything here – she’s dreaming and thinking. She loved these pictures and ordered hundreds…Everyone was scared of Chanel, but her models adored her. She was the queen of the whole thing. When she died they gave her a funeral like they did de Gaulle.”

The portrait was created when Chanel was at the height of her power. It reveals a gentleness of lighting and a tenderness of expression. Horst’s image lacks her typical stolid appearance and reveals an intimate glimpse of a Chanel who is perhaps not completely sure of herself. She is comfortably embraced by the contours of the chair lending an air of relaxation and refinement with the delicate outline of her profile set against the satin upholstery. Horst sourced the Louis XVI-style chair inspired by a similar item he had seen in Chanel’s apartment at the Ritz. Simply dressed, but with her trademark bold jewelry, she holds her cigarette in a characteristically masculine way with a cropped haircut. Chanel was the epitome of modernity influencing women the world over and in Horst’s portrait, he reveals an intimate yet refined vision of the legend. 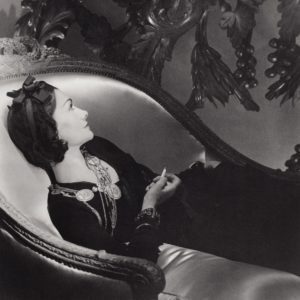