Sir Winston Churchill, perhaps Britain’s most revered prime minister, stood defiantly against fascism becoming an inspirational figure for the nation and emblematic of the eventual triumph of democracy. Scottish photojournalist Harry Benson, a legend in his own right, says, “Sir Winston Churchill was to me the most important person of the twentieth century, and there are many who will agree. As a child, I listened to Churchill’s speeches during the war, and I remember the inspiration he gave the British people during those very hard times. Listening to him had been part of what made me want to become a photographer and to be at the center of what was happening in the world.”

Early in Benson’s career, around 1960, he moved to London and began taking assignments from the Daily Express newspaper run by Lord Beaverbrook. Benson had several opportunities to photograph Churchill. Ultimately it would be his last encounter with Churchill that resulted in Benson’s most memorable portrait of the legend. As Benson says: “The last time I photographed the great man was when he visited his old school, Harrow, in the winter of 1961. The students gathered round, shouting and cheering. They sang the school song, adding a verse that went something like, ‘And Churchill’s name shall win acclaim through each new generation.’ It brought tears to his eyes. That was Churchill’s last visit to Harrow.”

The jubilant photograph of Churchill’s final return to his alma mater captures youthful excitement and a feeling of triumph surrounding Britain’s legendary figure. Churchill looks on contentedly at the excitement and show of affection caused by his presence; perhaps he is reflecting on his own time at the school seventy years earlier when he was the same age as the young men before him. Adding more resonance to his last trip to the illustrious school was the commencement speech he delivered there as prime minister in 1941 during the increasingly hopeless war. In the speech, Churchill would utter the now famous words, “Never give in. Never give in. Never, never, never,” inspiring Britons to persevere. Harrow School was filled with significance for Churchill, and Benson deftly captured him in the twilight of his astonishing life. Benson himself would continue to create incisive photojournalism that would not only document and preserve history for future generations, but also breathe life into history itself through his penetrating portraits of the storied personalities of the twentieth century. 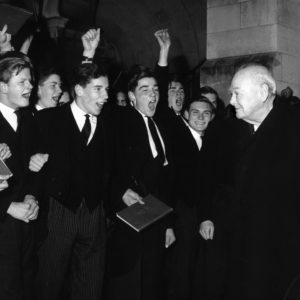