Gered Mankowitz famous photographs of Jimi Hendrix are a testament to the young, energetic, and creative spirit of one of the 1960’s musical giants. Mankowitz was born in London in 1946, the first of four sons to Wolf Mankowitz, an established film writer and producer, and his wife, Ann Mankowitz a psychotherapist. Dropping out of school at the age of 15, Mankowitz began his career in photography and displayed an innate talent that would be discovered by legendary photographer Tom Blau, who offered him an apprenticeship in his famous studio, Camera Press Ltd., where he would gain much experience. In 1962, his photography career would start to take off. Still in his teens, he traveled to Barbados and began to work professionally on photography, following that he would travel to Paris and begin working in fashion photography. Uninterested in this area of work, Mankowitz began working under “show-biz” photographer Jeff Vickers. After opening his first studio at 9 Mason’s Yard, in the cultural center of the London Swinging 60’s scene, Mankowitz began taking photographs of musicians, actors and show people, creating a name for himself and eventually meeting Andrew Loog Oldham, manager of the Rolling Stones, who would later hire Mankowitz as the Stones official photographer.

In 1966, Jimi Hendrix was brought to London by the Animals bassist, Chas Chandler, encouraged by the Rolling Stones, who had seen him play while on tour in New York. Hendrix was set to do some gigs in London and did a show at the Bag O’ Nails club, where the audience included some of the biggest names in Rock and Roll. After a performance, Mankowitz approached Jimi Hendrix to do a photo shoot at his studio at Mason’s Yard. That session produced what are now considered to be the finest studio portraits of Jimi Hendrix and the Experience.

The young band members were enjoying their new unexpected success and during the shoot, Mankowitz developed a relationship between the photographer and the subjects, that mixed with the laughter and banter of the moment and created a session that showed the band with honesty, an infectious innocence and naivety of their new found fame. The solo portrait of Jimi Hendrix captures the persona that made Hendrix such an iconic figure; the liberation, daringness, and individualism he represented. The session had been going on as a shoot featuring all three of the bands members, and the solo shot was the only portrait of Jimi Hendrix taken on the last frame of the roll, as Mankowitz explained: “On the last frame of the first roll, I took the portrait that would become the most important photograph of my entire career and possibly the most famous studio portrait of Jimi ever taken, the portrait that I now call “Classic.” It is extraordinary to look back and realize that this portrait was the only shot I did of Jimi by himself on this first roll. I must have either felt very confident that I got it, or was so stupid that I didn’t realize what had just happened. Either way, it was captured, and would go on to have a life of its own many years later”.

That image highlights the 24 year-old African American living in London, that had for years been a back-up musician to Blues acts such as Curtis Mayfield, Little Richard, and The Isley Brothers and that in the span of a few months had found much recognition; with a flowing and unkempt Afro and a creative attire that was much more tolerated and even encouraged in London than it would have been in the States; a modest and humble person who was cherishing in the fame, the budding creativity and potential that was to come as he would later be considered one of the most seminal guitarists and musicians of our time. 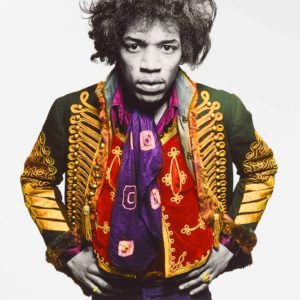