View cart “Evening dresses E” has been added to your cart.
← PREV
NEXT →

Signed, titled, dated and numbered from edition of 12 on print verso.

Frank Horvat rose to prominence during the late 1950s as a reportage photographer with a fresh approach to shooting fashion moving beyond the prevailing approach of statically posed shoots. An inventive photographer who expanded the genre of fashion, he became primarily known for his reportage and improvisational techniques by placing models in a variety of dynamic situations. Horvat shot for the top magazines in Paris, London, and New York and was always looking for an independent voice. His most acclaimed fashion images have an element of chance, spontaneity, and surprise transcending the time they were taken. Although this would frequently occur in the streets during shoots, chance would also play a role in the images he would create in other settings as well. One image is the vibrant yet ethereal “Umbrella Color” showing his unique style as well as the role of chance in his work.

“Umbrella Color” was taken in Paris in 1967 as a shoot for Harper’s Bazaar’s most important issue of the year, the Paris Collection. The influential magazine’s art director decided it should appear on the cover after the results from Horvat’s photo shoot came back much better than anticipated. During the shoot, Horvat’s assistant did not correctly wind one of the flashes and it failed to fire; Horvat was not aware of this at the time. Without the top strobe light, a vibrant and serendipitous photograph was created. His work, influenced by the French humanists, enliven the coincidental moments of joy in life that Horvat himself calls his “miracles.”

This failure of the flash to fire was, indeed, a miracle. The resulting image unites fashion, photography, and fine art into an elegant composition. The viewer gazes upon the female form of a meditative woman as an umbrella shields her and creates a patterned silhouette with color radiating over her body. Created well before the advent of instantaneous digital photography and manipulation, Horvat’s photograph is a uniquely composed glimpse into the mysterious world of a woman of grace, style, and fashion.

Ultimately, Horvat’s enduring images encourage the viewer to enjoy the genuine moments captured in the photographs. His search for truth based on a universal understanding of empathy and coincidence, help the viewer focus on Frank’s fascination with the world. 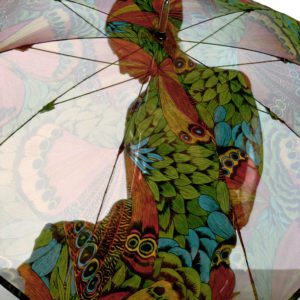