Frank Horvat moved to Paris in 1955 and from the beginning he became fascinated with its urban activity and its diverse facets, chartering the urban life of the city from the 1950’s onward. The exceptional image “Paris, Gare Saint-Lazare” shot in 1959 presents this hustle and bustle of Paris that Horvat was intrigued by.

“Paris, Gare Saint-Lazare” was taken as a part of a commission for Réalités, a magazine that was considered by many at the time to be the world’s most influential monthly-illustrated magazine. Rising from an assignment regarding Paris’s sprawling suburbs, Horvat felt compelled to photograph Saint-Lazare as it was the most important station for commuters.

Using a Leica camera with a telephoto lens on a tripod, Horvat took several thirty-second exposures so that the architecture and some people would be still, and the moving crowd would blur. By using this technique, Horvat appears to underscore the physical movement and the transient nature of the environment as well as the moments spent within it. For some of the individuals in the crowd at the bustling station, they seem to have stopped themselves in time standing still in the sea of movement that energizes the space. It is a prime example of understanding how the camera sees movement and action completely differently than the eye. The compression of time and space finds a beautiful visual equivalent in this memorable image.

The image itself was “rediscovered” by Horvat almost thirty years after it was shot and now has come to be regarded as one of his most extraordinary photographs that uniquely capture the feeling of a time and a place. 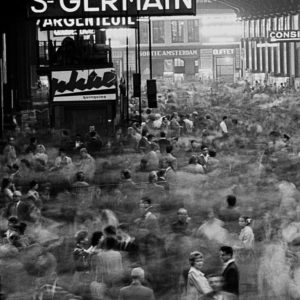