Signed, titled, and dated on verso

Edouard Boubat was one of the most prominent of the French Humanist photographers. His portrait of Lella is a story of love; It captures a moment where both photographer and model interchange intimacy, wherein the model is captured in youth and facing the distance, granting the photographer vulnerability, while the portrait itself, reveals the photographer’s adoration. There is no physical aspect of the photographer in the image, but rather he loses himself in the picture. In this photograph, Lella’s beauty and grace are suspended in time for eternity. Perhaps this image gives us an insight into what Boubat’s photography would come to offer; a yearning to capture life’s fleeting blissful moments, the photographer’s desire to capture moments of beauty and euphoria in everyday life.

“Just as love at first sight erases everything and creates a kind of void, so I must confess that, when I take a picture, I have no desire, no intention, no memory. What I am photographing has taken control of me, it is a leap in the dark. It’s over in a second. This vacancy allows the fleeting instant to break through, the instant in which everything is plunged into one unique light.”

When Boubat met Lella, she was one of his sister’s friends. The photographer described these friends as one more beautiful than the next and they would become some of the earliest subjects for his work. The photograph, taken in 1947, while the war was still recent in French conscience, pointed to a resurgent French society and in turn, to the developing youth who were to face the modern challenges of rebuilding and securing the future. In this context, this post-war image is reminiscent of Marianne, a French national symbol that personifies the republican motto of “Liberté, égalité, fraternité”. In the photograph, Lella is poised and framed in the established French visual tradition. Lella’s figure presents a stoic Marianne, while her close friend, Seguis, shown in the background, signifies a war-torn French pathos, thus accentuating Lella’s beauty and serenity.

The portrait of Lella is not only a portrait of a heroine for an identifiable French public, it is also a portrait of devotion for the photographer. Lella would eventually become Boubat’s first wife and a continuous muse throughout his life. It is in the personal relationship between the photographer and model where a sense of magnetism and intimacy is possible; only through the wondrous gaze of a young lover could Boubat have achieved pictures that stir the heart.

“Plus qu’un modele, Lella a ete ma muse”  “More than a model, Lella was my muse”

Eduoard Boubat would later be called “the peace correspondent” by poet Jacques Prévert, as Boubat would personify the French humanist vision of capturing the beauty and affection of the human spirit. A photoengraver by trade until 1950, his personal work, especially that featuring his muse Lella, indicated unusual talent.

“At the sublime moment of taking a photograph, there is nothing else to wait for: it is there. Time has melted in an instant. Some have invented eternity; I am simply a modern inventor. I play with the moment. Whoever finds a treasure, a treasure offered to everyone, becomes its inventor, its discoverer: a light-catcher. “Come my love, enter, take a look just for the pleasure…”

Boubat’s Lella has become one of the most recognized and memorable portraits of idealized beauty in classic photography. It is a portrait of beauty, innocence, youth and purity, adjectives that also describe the spirit of Boubat’s photography. 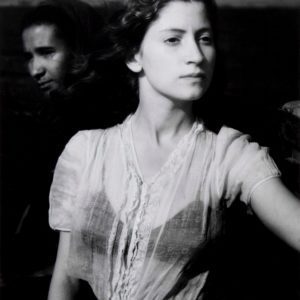