Certainty in the Land of Enigmas, The Circus Animals Desertion Series

Dianne Blell’s renowned artwork occupies a unique position by merging photography and dreamlike painting. The two mediums sublimely converge to create a new kind of reality in which Blell’s photographed actors are placed in her surreally painted atmospheres referencing mythological or psychological themes.

In one series she produced at the end of the 1980s entitled, “Desertion of the Circus Animals,” it revolves around a more personal yet deeply psychological element for Blell. It incorporates her poetic and modernist art interests to create freely associative imagery in a topsy-turvy kind of world. Through the experiences of a young girl in surreal landscapes where she encounters enigmatic objects and symbols, the viewer joins her at a kind of crossroads of consciousness in which Blell’s personal imagery evokes various references. The images are based upon Blell’s own dreams with the young girl representing Blell herself. Past, present, and future time frames simultaneously inhabit in the space of dream-based compositions.

Specifically in “Certainty in the Land of Enigmas,” Blell reveals the overall landscape itself was chosen to represent the “Landscape of the Mind” as a kind of dreamscape while the stream within it is meant to be the “Stream of Consciousness” also a metaphor for time. A painting Blell admired, Pablo Picasso’s 1905 “Family of Saltimbanques” depicting several circus performers in a similarly arid landscape, influences the landscape’s style, clothing, and the composition somewhat. Unlike in the original Picasso though, Blell has chosen to focus on only two of the individuals which are placed in a more isolated relationship to one another and they are rendered in the composition more three-dimensionally as photographic images. As the young girl represents Blell, she is placed in a solitary position across the stream from a man who signifies her father and who attempts to hand her flowers.

The image has further symbolic references such as the Picasso drawings of women in the sky that invite the viewer to interpret elements in the composition that were designed, painted, staged, constructed, and photographed by Blell in her studio. 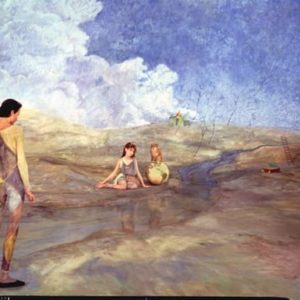