David Yarrow, savvy and unfaltering, shoots White Horses 18 hours after touching down in Iceland. The work begins soon after Yarrow lands and he has to manage multiple variables to achieve an advantageous moment; being in position for optimal background conditions and having the animal subject in place. Yarrow comments that he has not been lucky in the country before but that it is better to be bold at the risk of failing then to not attempt at all. The image is finally made after considering the many components Yarrow brings forward with his team.

“There are many components to this image that coalesce and the backdrop of these unruly and dramatic rock pinnacles was an immediate choice. They are a well-known formation by the coastal village of Vik, which is about three hours’ drive east from the capital. The village is well known to filmmakers because of its black beaches and otherworldly rock formations. I have stayed nights in Vik in the past and yearned for conditions like these in which to shoot…”

Yarrow established his use of scenery as inherently expressionistic. Strong winds raise waves that exemplify the magnitude of the landscape, towering rock formations add a mystical quality to what appears as an enchanted land, while the black sands of the beach add contrast to the dramatic and ominous atmosphere. The horse’s wet coat enhances its striking values, appearing wild and indomitable. The location used in the photograph has also worked as a backdrop for the HBO dark fantasy drama, Game of Thrones.

Like much of Yarrow’s work, the picture is able to place its subject, the wild horse, within an evocative context, we fully sense the beauty and power of the natural world. Like much of Yarrow’s photography, this image stresses an appreciation for the natural environment. Yarrow has been a consistent supporter of varying conservation efforts and is currently the affiliated photographer for the Tusk Trust, a conservation charity that aims to advance innovation to protect Africa’s wildlife and natural habitats.

The influence of Edward Curtis on David Yarrow is evident here, which the photographer properly acknowledges. Curtis’s Canyon de Chelly, captures the scale and sense of place of the Arizona desert, creating a salient image of the final frontier. Yarrow uses this influence to capture the “enormity and rawness” of the Icelandic shore in White Horses.

In Yarrow’s quest for the perfect shot; balancing scenery, subject, and influence, the photographer creates an image that captures the beauty of nature’s raw freedom. Yarrow’s empathy towards the natural world is also evident in his aesthetic. The lone horse and dynamic scenery create a composition reminiscent of the Romanticist Painting Wanderer about the Sea Fog by Caspar David Friedrich, that can perhaps remind us to pause and marvel at the majesty and significance of nature and our relationship to it.

The camera and the horse have been collaborators for 160 years and this is perhaps the most powerful image that I have ever taken of the animal. It has the essence of a dream or a fairytale, not really daily reality. Icelandic horses may look wild, but because they can be managed by their owners, many ideas are possible.

My cognitive processing in the country is characterised by the desire to be creatively bold. It often doesn’t not come off, but as Wayne Gretzky said “you miss 100% of the shots you don’t take”. It is better to try and not succeed, than never try at all. And I have got used to not succeeding in Iceland.

I have rarely known a wind as strong as the one that greeted us in Iceland in March 2018 and whilst it made driving difficult, the upside was that the sea was transformed into a ferocious body of white horses. Stormy seas have long attracted artists and whether I am at home in Devon, or working in California, a powerful sea casts a magnetic visual spell on me. I am not alone in this obsession, but images of storms often fail to convey the enormity and rawness of the conditions. Working the situation into a transcending single shot narrative is a tough ask.

I just needed to work towards a plan as quickly as possible, before the winds subsided. My instincts were immediately to find a white horse to complement the conditions and my fixers were already on this thought process by the time I arrived in Iceland.

There are many components to this image that coalesce and the backdrop of these unruly and dramatic rock pinnacles was an immediate choice. They are a well-known formation by the coastal village of Vik, which is about three hours’ drive east from the capital. The village is well known to film makers because of its black beaches and other worldly rock formations. I have stayed nights in Vik in the past and yearned for conditions like these in which to shoot.. This really is Game of Thrones territory.

I needed the distance between the horse and the rocks to be as short as possible and this necessitated shooting at low tide – a stroke of luck as this would be early the next morning and the wind was forecast to die down in the afternoon. Indeed, this image was taken only 18 hours after we touched down in Keflavik, which says a great deal about the team around me.

Iceland is a truly remarkable country and the horses that live there have a uniquely wild beauty. I think this image just about does justice to both. – David Yarrow 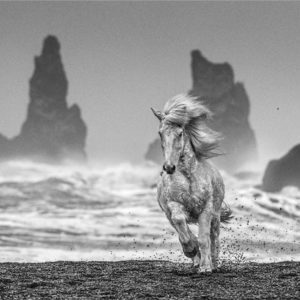