“During most summers, the Serengeti in Tanzania is defined by the traffic and some of the serenity of these endless plains can be lost. It is considered the crown jewel of the East African game reserves and – in my view – deservedly so. But that status comes with a price – tourists and jeeps – hundreds of them.

But not so during the Covid 19 pandemic of 2020. We took one of the first international flights in and unsurprisingly found virtually no one to be here. The swab testing logistics may be a little tiresome, but the light footprint is offering unprecedented opportunities to work alone in the field. In the vastness of the Eastern Serengeti, there are currently few humans and a huge number of lions. For those that are here, conditions for film making are perfect.

We sat with this stunning big male lion on the Utafiti kopjes from sunrise one morning. No other jeeps were anywhere in the region and so when he moved, we could adapt quickly without being inconsiderate to the line of sight of others. At about 7.45 am he saw a potential prey and with his eyes full of intent, he set off from the rocks above us. I had my chance, when he was still higher than my camera.

The angle and the line of the rock face work for me, but the real bonus is his rockstar aesthetics. He would not look out of place headlining at Glastonbury with The Cure. It’s an apposite name for 2020.” – David Yarrow 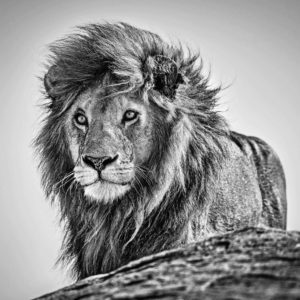