Any town with a name like Big Timber immediately grabs my attention. It just sounds like a place with an interesting past. As it is, this modest community of 1500 to the west of Livingston in Montana, is a little run down and sleepy. It is nestled between the Crazies mountain range to the north and Yellowstone to the south and most people simply pass it by.

However, in trawling the internet, we discovered a saloon bar in the high street with neon signage on the facade that caught my interest. We visited the location and there was certainly potential, but clearly the shot would have to take place at night.

There was then an immediate problem, as we discovered that the bar was the central congregation point for all the mountain men – not just from Big Timber, but from far and wide. To bring a wolf and a Victoria’s Secret model to the entrance and shoot when the bar was open, was simple asking for trouble.

The only viable option was immediately obvious – to shoot at 5 am, when hopefully most of the clientele had had enough, though in Montana, one can never be sure. Normal drinking hours don’t apply in this state.

As it was, we were okay and the bar owner agreed to keep the neon lights on for us. The next issue was simply that when we were in position, it was around -20 degrees – fine for the wolf, but a little chilly for California’s Josie Canseco.

She is, however, a trooper and we got the job done. My narrative was simply that the couple had hooked up inside the bar and were rushing home. The wolf certainly looks like he has a smile on his face – who can blame him.” – David Yarrow 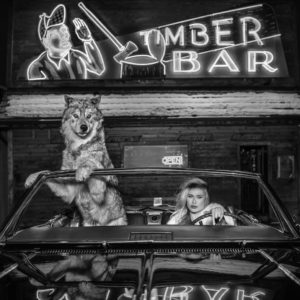