View cart “Family Tree” has been added to your cart.
← PREV
NEXT →

“Over the last few weeks we have quietly been photographing senior Native Americans against the backdrop of quintessential and emblematic American vistas.⁣⁣
⁣⁣
Whilst we will be releasing some of the series in the run up to the Presidential Election, this is not an overtly political statement from us. We know that Native Americans have long had a leaning toward the Democratic Party, but we took this assignment on because it is relevant, not to be political.⁣⁣
⁣⁣
There is wide recognition now that Christopher Columbus did not discover America in 1492 and the events in Minneapolis have accelerated the debate on the possibility of institutionalised racism in the teaching of American history. This is not a discussion we want to fully engage in – as we are ill equipped to add value, but I do want to celebrate some of the tribal elders I have had the fortune to encounter in the last month. Their pride, manners, grace and humility have been humbling. We have made new friends in the North.⁣⁣
⁣⁣
For this project we worked with Chief John Spotted Tail, the great-great-grandson of the fabled Lakota chief Spotted Tail. We spent two days with him in Northern Wyoming and he was so excited to wear the headpiece that only the most senior Native American chiefs like him can wear. His attire was emphatically his decision not ours. Their heritage is integral to their souls.⁣⁣
⁣⁣
The ground in front of Devils Tower has film history. It is, of course, where Spielberg shot Close Encounters of a Third Kind immediately after the release of Jaws in 1975. More poignantly, it is sacred land for Native Americans, and at dawn, before our early morning shoot, John and his wife – Tamara Stands and Looks Back, spent some time there praying.⁣⁣
⁣⁣
At around 8.30 am, the low hanging clouds lifted above the iconic geographical landmark and shafts of light lit up our canvas. We had our moment. Later that day, when I showed Chief John Spotted Tail this image, he shed a tear and I am proud to admit I did too. It was one of the most privileged days I have ever had in the field.” – David Yarrow 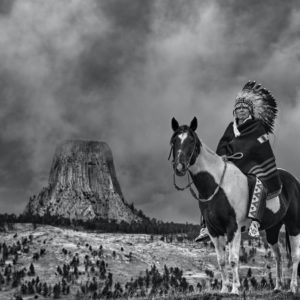