On a réalisé ce qu’on a rêvé…

In The Scriptures, Bernard Faucon brings poetry into the landscape, engaging in a similar textual aesthetic to ones popularized by the likes of Jenny Holzer or Ed Ruscha.

In this series, Faucon incorporates the use of picturesque environments so emblematic in his body of work. Using the hillside palette previously seen in Les Grande Vacances and Évolution Probable Du Temps, Faucon synthesizes thought and poetry into radiant letters emblazoned onto the horizon. His text becomes real; ideas become physical.

“The pleasure to say is different from the pleasure to show, to say in one’s own words, the words of your unique language. Those sentences of disenchantment that I had been pondering for some time, those solemn forebodings of “The end of desire,” may have found their source in the Moroccan slogans on the rocky mountains: “God, the King, the People.” A wish to cry out my personal truths the size of the landscape, to treat the words like physical bodies on the scale of their setting…

Staring from my own handwriting, I made big wooden words, 50 to 100 cm (20 to 40 in.), I put them together, covered them in reflective fabric (Scotchlight.) At the time of shooting, I used a powerful flash to turn them into ribbons of light.” – Bernard Faucon, The Scriptures 1991-1992

In On L’a Eu, On M’y a Pas Cru… (We had it, but we didn’t believe it) Faucon process, as an artist, has been reductionistic. At first, subject matter contained friends and family, later mannequins, after that rooms that were empty, or had objects. Meanwhile in The Scriptures, the poetic, sculptural text specifically engage in language and abstract thought instead of people or objects. Therefore, by using a visual style reminiscent of 19th-century realism like a Courbet landscape, Faucon delivers a message that combines the mind and the eye.

Above all, the sculpted words talk about a non-physical space; they become meditations. They are open verses, suggesting an ultimate human state of desire. Moreover, as one of the most consequential contemporary photographers from France, Bernard Faucon’s Scriptures series exists with an indeterminate purpose. The textual, sculptural photographs pose thought and grievance upon the natural environment. Likewise Faucon’s prose uses direct language, stylized by his handwriting, honoring the power of language with resplendent letters and with the effect to communicate visually. Bernard Faucon stopped making photographs in 1996. He had said everything he wanted with photographic images. 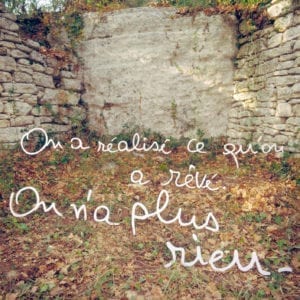