With over 200 international solo exhibitions in museums and galleries, Bernard Faucon, a French photographer and writer, has produced a wide array of photographs that are both conceptual and alluring. Best known for his series “Les Grandes Vacances” and “Les Chambres d’amour,” Faucon composes images that penetrate the senses with their dream-like qualities. The artist, who was born in Southern France and received a degree in Philosophy from the Sorbonne University in Paris, creates pictures that tell stories, whether comprised of mannequins, actual children, or taken of empty rooms. With ideas of memory, desire and love heavily embodied in his photographs, Faucon successfully merges poetry and art into a photographic image. He was an innovator and introduced the genre of subjective reality 25 years before it became common.

Between the years of 1987 and 1989, after a visit to Japan, Faucon materialized a series of photographs he entitled “Winter and Golden Rooms” in which he used the French process of Fresson printing to create an image. His photograph, “Chambre en Hiver, Le Fantôme,” from 1987, translated in English as “Winter Room,” is a soft, ethereal vision of desire and mystery. Similar to carbon printing, Fresson photographs, invented by Théodore-Henri Fresson in 1899, are created by preparing paper with several coats of different light-sensitive layers made of organic, inert vegetable dyes. Each color is printed separately much like a dye transfer photograph, but the resultant image is less literal and more painterly and romantic.

Described by the artist as, “uncluttered, mystical spaces, where only the dazzle of the presence still dwells, the last material limit, the last visible surface before pure incandescence, before whiteness,”

Faucon’s photograph dwells in an intimate place of uncertainty. The shadow behind the curtain suggests a figure, and the title of the image only suggests that it is snow that lays on the ground. The viewer can assert from the lack of objects in the room that this space that Faucon has captured and depicted is deserted, and the muted colors and cool tones add to the mysterious and ambiguous ambiance of the room. It is an image of peace, tranquility and of solitude. The photograph is in many ways a mystery, a place unknown but familiar, like a lost memory. Bernard Faucon succeeds in creating a body of work that is subjective in nature and sensual in its pictorial qualities. The images are visual poems that are non-reductive. They are rich in symbolism, spirit and sentiment. 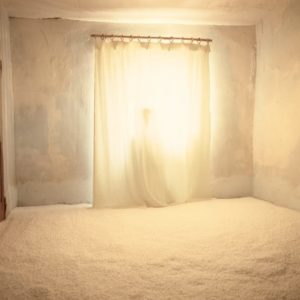