A seminal figure in the development of American photography, Berenice Abbott is celebrated for her landmark images of New York City in the midst of great transformation during the 1930s. Originally from Ohio, she learned photography in the early 1920s while living in Paris working as Man Ray’s assistant. Eventually rejecting Man Ray’s experimental approach, she became fascinated by the work of Eugène Atget and his poetic yet realist documentation of turn of the century Paris. She was responsible for saving his archive and it inspired Abbott to devote similar attention to New York City where she moved in 1929 after a short trip when she was seized by a “fantastic vision.”

Abbott’s mission was to preserve the older nineteenth century New York City which was making way for a new identity emerging among the great skyscrapers with the decade long “Changing New York” project. Eventually she convinced the Federal Arts Project set up by the Roosevelt administration to help underwrite this project and in 1935 her application was accepted. Over the next four years Abbott used a large 8 x 10 inch camera to record the city’s emerging skyscrapers and bridges, new and old forms of transportation, and crowded street scenes. “Changing New York” would capture her enthusiasm for the urban built environment and present her fresh and modernist perspective documenting the rise of the most dynamic city in America.

Exemplifying Abbott’s clarity of vision in presenting a shifting urban environment is the image “West Street” taken in Manhattan’s Lower West Side. Abbott returned after two years in 1938 to continue her exploration of West Street’s old commercial buildings, but this time the view across the street was unobstructed by a new elevated highway. Taking advantage of this for the image, Abbott stood at street level at an oblique angle to the block capturing the shadows cast on the angular forms by the morning sun. She used a long lens to compress the space in order to emphasize the spatial relationships between the elements of the area. It is a progression of increasingly taller forms from the vehicles and nineteenth century buildings in the foreground up to the looming skyscrapers of the Financial District with its imposing Art Deco tower of One Wall Street.

This emblematic work is an accurate document of the city and serves as a visual metaphor for the cityscape as a clamorous intersection of old and new. Eventually these buildings on West Street and adjacent buildings were demolished in the 1970s for the construction of the World Trade Center complex and today is the site of the 9/11 Memorial. Through Abbott’s deftly composed work, we can now look back upon an important stage in the evolution of New York City and its transformation by a multitude of ethnicities into America’s most dynamic metropolis. 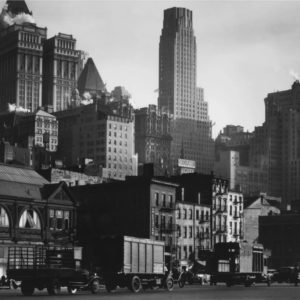