Andre Kertész was a key figure in expanding the language of modern photography. His original use of the camera often underscored life’s beautiful details making them worthy of attention and affection.  Producing penetrating work, Kertész claimed never to document but to give an interpretation. From the start he identified a unique way of looking at the world that became a crucial development in photography and Henri Cartier-Bresson would even say of him, “Whatever we have done, Kertész did first. We all owe something to Kertész.”

Truly a unique photographer with a distinctive eye, Kertész’s images are devoid of self-consciousness and artificiality. They look modern while being created almost a century ago.

A native Hungarian and originally a stockbroker, Kertész would develop into an avant-garde photographer around World War I when he served in the Austro-Hungarian army. Wounded in 1915, Kertész began to photograph the subject of active and physically fit people. He made photographs of himself and other soldiers swimming in pools in Esztergom as therapy for their battle injuries.

Such artists as Alfred Steiglitz, Edward Steichen, and Paul Strand were showcasing modernism in photography at Gallery 291 in New York at the same time, but their work was unknown by Kertész or in most of Europe. He used point and shoot cameras to best record spontaneous moments in life, and “Underwater Swimmer, Esztergom” was photographed with bright sunlight from the edge of the pool with the reflections creating almost a thunder-like texture on the water as the swimmer seemingly glides past. The swimmer is actually stationary, but Kertész has instilled him with a sense of action in this unposed image.

This is an early example of patterning using natural light and shadow. Kertész would further explore this aesthetic which would come to define much of his later acclaimed work.

“Underwater Swimmer, Esztergom” has become one of the most desirable images that Kertész created. It is a penetrating, modernist image. It takes full effect from photography’s ability to compress three-dimensional space into a unique two-dimensional representation. Both realist and abstract, the image is quite dreamlike. Moreover, it provides a feeling of tranquility and stillness. The picture is an early masterwork by one of the most innovative photographers in the history of modern photography. 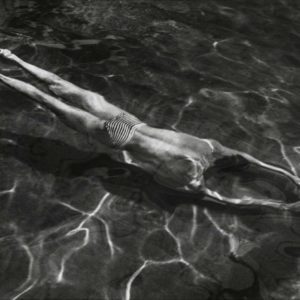