Signed and numbered from edition of 50 in ink on recto.

Born in London, England in 1938, O’Neill’s introduction to photography came by way of applying to become an air steward. By taking a job in the photographic unit of British Airways, the now famed photographer had started a lifelong career that perhaps foreshadowed the unconventional way it had begun. O’Neill’s pictures of public figures began to draw attention by their distinct snapshot aesthetic. After landing a job at the Daily Sketch, the photographer started to gain notoriety and commercial success, later to become one of the photographers responsible for mythologizing the “Swinging Sixties.”

In “Mick Jagger in Fur Parka”, taken in 1964, the photographer creates an image that is both intimate and public. The gaze concentrates on Jagger’s expression and eyes while the fur parka encloses his face and frame. Apart from Jagger’s appearance, his hand is gently holding the parka closed upon his chest, evoking a sense of intimacy while bringing the viewer into the picture. The variations in texture between the fur, skin, and hair give the photograph a tactile quality. This image highlights the individualism of Jagger, presenting at once a rebellious, counter-cultural Rockstar and a vulnerable; profound, and emotional person underneath.

“You must like the people, that’s the key thing to any job.” 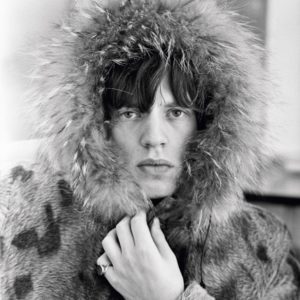