Signed and AP in ink on recto.

Legendary British photographer Terry O’Neill was born in London, England on July 30, 1938. He began his career in photography at the age of twenty and since has photographed everyone: musicians, models, movie stars, politicians, and even members of Great Britain’s royal family. Over the course of a six decade career, O’Neill has photographed for Rolling Stone, Time, Newsweek, People, GQ, Vanity Fair and many other world renowned publications.

In 1977, Terry O’Neill took a photo of Faye Dunaway at the Beverly Hills Hotel the morning after she won the Oscar for Best Actress for “Network” at the 49th Academy Awards. He would go on to marry her just a few years later, but the marriage ended in divorce. This image has become one of his most iconic Hollywood shots of all time. Draped in silk, wearing high heel shoes, and last night’s diamonds, Faye Dunaway is the ultimate movie star. Surrounded by her tea, her trophy, and the morning newspaper, the picture weaves together the story of the night before and freezes a historic moment in pop culture. The photograph gives you context, clues, and most importantly an undeniable glamour. Terry O’Neill was photographing Faye Dunaway on an assignment for People Magazine. While other photographers typically took an image of the winner in the press room holding their award, O’Neill was consciously aware that the real story could not be captured in that press room. It was the next day, when the reality of winning has set in, and how much the careers and lives of these actors and actresses will change that the real story lies. At six o’clock in the morning this image was taken, and candidly represents one of the greatest actresses of all time. 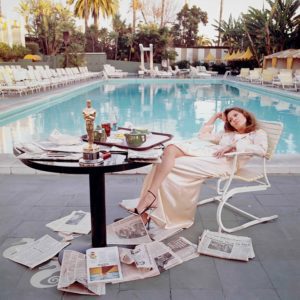