In November 2019, Stephen Wilkes traveled to the Canadian Arctic to photograph Polar Bears.

With this shoot, Wilkes continues his Day to Night series, focusing now on endangered species and habitats.

“This Day to Night photograph of the Polar Bears in Churchill, Manitoba, was photographed in November. When the ice freezes and the polar bears begin to migrate and cross Hudson Bay onto the ice to find food. Time changes in this Day to Night on the Y-axis. The bottom of the photograph is early morning, and as your eye moves up vertically, time moves forward. The evening begins with the Harvest Moon rising, which can be seen just above the horizon line. The dramatic rays of light within the sky are actual moonlight rays.

There are a few polar bears that can be seen meandering on the snow-covered ice. One needs to look closely to see them, as they are very adept at camouflaging themselves against the white snow. Notice the green color at the bottom of the photograph; that’s bay water, which is not fully frozen yet in the early morning light. Regularly, seawater would not be seeping through the ice this time of year, and although it was very cold, the bay was not completely frozen due to weeks of previous unseasonal mild weather.

That reality has created less ice for the bears, which impedes their ability to cross the bay and search for food. The number of bears we saw was much less than in previous years. There’s real data that reflects the fact that due to the warmer air and the rise in water temperature, less ice is being created and having a direct impact on the survival of this species.”

Wilkes completed this photograph over the course of 36 hours from a tundra buggy, elevated 20ft off of the ground.

Wilkes used the buggy to get his view and to avoid the bears, too high up for bears to climb up and reach him. The buggy also provided him with some shelter from the weather, some heat, and a bathroom.

Stephen Wilkes’s most recent work addresses climate change and the ecological impact it is having on a global scale. Ultimately, Wilkes shows unwavering commitment to inform as well as work towards a change. He is an example of how a photographer can advocate for the environment while producing a rewarding body of work. 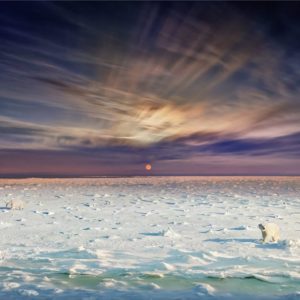