Signed in pencil on verso.

Sebastião Salgado is among the most acclaimed documentary photographers of the twentieth century.

He is celebrated for his epic projects depicting the human condition and nature. Born in rural Aimorés, Brazil in 1944, Salgado earned a doctorate in economics before turning to photography as a professional endeavor. Possessing a unique vision given his background, Salgado’s photojournalism largely deals with visualizing the larger effects of socio-economic forces in the modern world through his lyrical portrayals of humanity.

Since his first project in 1993 centering on the indigenous poor in Latin America, he has become known for working on long-term pictorial series of ambitious scales. Salgado creates dynamically expressive compositions constructed with a careful attention to dramatic lighting, elegant contours, and striking visual impact that are photographed with a 35 mm camera in tonal black and white. Ultimately, Salgado gives a voice to his subjects bridging the fortunate and the unfortunate, the developed and the undeveloped, the stable and the uprooted.

“Churchgate Station, Bombay” is perhaps the most iconic photograph to have emerged from Salgado’s second major project, “Migrations: Humanity in Transition.” The series was a six-year endeavor to poetically and strikingly photograph population growth and movement in 43 countries including India. The Western Railway with its terminus at Churchgate Station has one of the highest passenger densities of any railway system in the world making it notoriously and dangerously overcrowded. Salgado’s view of Churchgate Station from above dynamically conveys the almost awe-inspiring movement of the crowds in daily mass migration.

It is a cleanly symmetrical shot of a scene of chaos. With its high vantage point and slow shutter speed, the perspective fortuitously makes the crowds at the bottom of the picture blur into undulating lines, but those in the distance appear in focus as they hurry between still trains. On an immediate level the image provides a sense of the daily reality of what it means to live in the region, while in larger terms it points to the rapid rate of growth in developing world cities.

The image is included in the collections of the Los Angeles County Museum of Art, the International Center of Photography in New York City, and the J. Paul Getty Museum in Los Angeles among others alongside other work by Salgado which examine universal humanism. 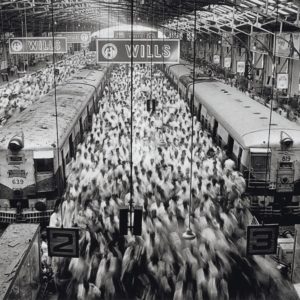