Girl in the Light

Ormond Gigli’s photographic career began early in his life; In high school, he worked after school as a photography assistant for the Ladies’ Home Journal. After graduation, he was drafted into the Navy, where he would study at the Navy photography school. Gigli returned to New York after the war and shared a studio in Carnegie Hall, beginning his career as a freelance photographer. Shortly after, Ormond Gigli set up a temporary residence in a small hotel in France. By merit of his own industriousness, Gigli approached Life Magazine’s Paris bureau, intuitively and unannounced, where the bureau chief gave him his first assignment, launching the start of a prolific career during the growth of glossy international fashion magazines. Distinguished by his film director approach to photography and untethered to any one genre, Ormond Gigli’s pictures have captured significant moments in the advertisement, fashion, and entertainment industries throughout the decades. Gigli’s drive to capitalize on his own creative spirit throughout his assignments and his affinity for traveling the world in search of his pictures made it possible to create iconic images now revered as classics.

For “Girl in the Light”, 1967, Ormond Gigli was using a 5000-watt light, which was widely used in film production at that time. The photographer decided to incorporate the powerful light into a more personal project; given the large dimensions of the light fixture, he asked the model if she would be willing to pose inside of the light. The resulting image is one that characterizes Gigli’s adaptability as a photographer. The photographer’s creative improvisation surfaces at any moment and his ability to act upon a creative spark convey the great capacity to merge his imagination, ingenuity, and determination in creating unique and memorable pictures out of found opportunities.

By placing a light source behind the fixture, he creates an illusion of the model radiating light in place of the bulb; the brilliant model becoming the sole focus of the image, engrossed in its clarity. The composition of the image is alluring and establishes a tranquil aesthetic within a whimsical context. It’s playful and elegant, while captivating and improbable at the same time. The photograph presents Gigli’s mastery of composition, lighting, use of subject, and context; encompassing attributes that make it a trademark of his inventiveness. The photograph’s mysterious allure also feels curiously familiar which is perhaps because it recalls the rarely noted but colloquial 19th-century trend of the girl in the moon motif. Used from stereoscope cards to big brand beer logos, the girl in the moon image represents serenity and reflection in the concepts of femininity and beauty. Ormond Gigli surreptitiously captures a modern take on an age-old symbol in a lighthearted manner.

Ormond Gigli created many more memorable images, from “Girls in the Windows” to other famous noteworthy profiles and advertisements, taking part in recording moments that have transcended their time periods and give further credence to the importance of resourcefulness and the freedom of creativity in a post-war age of transformation and prosperity. 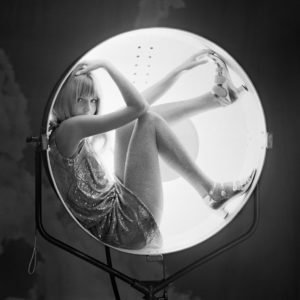