The Buurkerk at Utrecht, After Pieter Saenredam – Imitatio Sapiens Series

Signed, dated, and numbered from edition of 5 on verso.

From Realism to Impressionism, Constructivism to Modernism, to Conceptual and Contemporary Art, we have seen a resurgence of an artist’s capability to learn and borrow from the Canon and the great masters whose conventions of beauty have been pivotal in how we receive art. Olivier Richon, professor and head of the graduate program of photography at the Royal College of Art London, has built a career investigating theories of representation and exotism within his still life photographs and broad spectrum of published essays, and is known for reinterpreting the genre of still life photography.

Reminiscent of the Dutch Golden Age and Flemish still life, Richon’s conceptual photographs are embedded with many doctrines of philosophical thought, and are able to instill within the viewer a sense of longing; a desire to know what is beyond what we see, beyond the image, and beyond the mental constructs of reality. They instill a desire to remember and recollect history in the form of a physical representation of a memory or event. The photograph becomes more than just an image. It is a relic or talisman of our personal and unified history. He draws on various visual disciplines as he finds a meeting ground for painting, staged drama, and photography.

Intrinsic to Richon’s photography is the allegorical context in which he places his subject, whether animal or inanimate object. Peering towards “Interior of the Buurkerk, Utrecht,” painted by Pieter Jansz. Saenredam in 1644, the monkey, personifying human behavior (and sharing over 90 percent of our DNA), becomes the spectator in Richon’s photograph cleverly entitled, “The Buurkerk at Utrecht, After Pieter Saenredam-Imitation Sapiens Series.”

With a wealth of symbolism and metaphor, Richon creates romantic imagery depicting invented scenarios, advertently constructing meaning through the use of objects. His understanding of Renaissance perspective and skilled use of lighting assists in acquiring the 18th century ambiance to which the solemn tone of this image pays homage, and the viewer, visually captivated by a sense of serenity and solitude, perceives an illusionary depth and vanishing point created by the painting within the image. “The Buurkerk at Utrecht, After Pieter Saenredam-Imitation Sapiens Series” places the viewer outside the viewing experience, creating a commentary on one’s own affair as the spectator. It also calls into question the issue of the difference in looking – (as monkey does) and seeing – which he is incapable of. This then, like a collection of Russian Dolls, leads to an even larger issue – the difference between “seeing” and “understanding.” 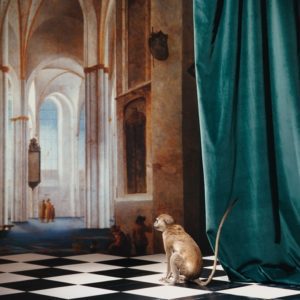