View cart “Keith Classic, Keith Richards, Los Angeles” has been added to your cart.
← PREV
NEXT →

Originally trained as a soccer player and then a surgeon, the 30 year-old South African was desperate for a change. He moved to Manhattan in 1969 with little more than the vague hope of pursuing a creative career. He quickly fell in with New York’s notorious underground crowd of the time by being introduced to Max’s Kansas City where Andy Warhol and his protégés would usually gather as well as others like the close friends Robert Mapplethorpe and Patti Smith.

In 1969 Mapplethorpe was an artist not yet involved with photography, Smith was exploring writing, and Seeff was beginning to learn how to interact with subjects he was photographing. Well before the friends were famous, Seeff simply believed they were interesting looking and he invited them to do a shoot in his West 72nd Street apartment. They all immediately hit it off.

In Seeff’s renowned images taken in his kitchen, equipment is present and visible in the images becoming a part of the environment and predating what would become part of Seeff’s signature style.

Seeff says about the shoot: “What really touched me was the absolute depth of the love between them. If you look at the way they were together, and the way that he looked at her, and the way that she looked at him . . . I had no way of knowing the cultural impact that they would both later have. After Robert’s death Patti told me that these shots come closest to her remembrance of the profundity of the love between them.”

Seeff’s photographs masterfully reveal the intimate connection between Mapplethorpe and Smith in a fresh, informal but arresting way. It is fitting that both artists would impact contemporary culture through their own, unique and artistically non-conforming voices. 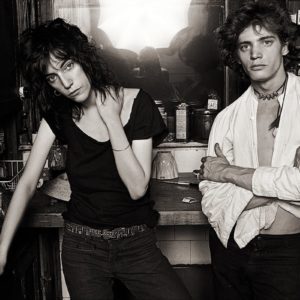