Babe Ruth’s dominating influence changed the game itself. He became the face of the New York Yankees and embodied the ethos of the game of baseball, American sports culture, and New York heritage. In Babe Bows Out photographer Nat Fein captures the beloved athlete and showman in an image that has become synonymous with the immensity of its subject.

While working as a staff photographer at the Tribune, Nat Fein had not been assigned to work on the day that the New York Yankee’s would retire Babe Ruth’s number three jersey. On the day when the Yankees would celebrate the 25th anniversary of the Yankee stadium and retire “The Great Bambino’s” number, the mainstay sports photographer for the Tribune called in sick. Thus, on June 13 of 1948, Nat Fein was set out to cover what many suspected could be Babe Ruth’s last public appearance.

With booming attendance, the energetic cheers and applauses rendered to the commemoration of the stadium focused on Babe Ruth. The man that had popularized baseball with his big swing, 714 career home runs, and brought in the live-ball era, effectively changing America’s pastime, was giving one last goodbye at the stadium whose nickname bore his as “the house that Ruth built.” While other press photographers attempted to capture a portrait of the great American baseball hero wearing his uniform one last time, Nat Fein, tried to capture the iconic number on his jersey, stating:

“All the photographers were in the front, and I wanted to see how he looks from the back. So I figured, well, number three is out. The Babe bows out…” – Nat Fein

The final image is filled with emotion, a bidding farewell to the greatest player in baseball. At the time of the photograph in 1948, Babe Ruth had not played for the Yankees for over a decade. Ruth had also been ill for some time, and his appearance had changed; his thin legs and face showed signs of his fragile condition. Fein’s photograph, instead of highlighting the aged features of the passing of time or sickness, captures the silhouette of the baseball giant. The picture presenting Ruth with his classic number three jersey underlines the monumental influence he exuded over the game and New York.

The image not only symbolizes a sports hero but a man who was larger than life. His rough childhood with frequent visits to orphanages and hospitals, his kindness to black baseball players in a time of racial inequity, his fondness to volunteer his time for kids sick with Polio, and his larger physique, generate empathy in his farewell photograph. The photograph presents a poetic image that connects us through its resounding human and empathetic quality, connecting the viewer to an unwavering American hero.

Babe Bows Out eventually became the first sports photograph to win the Pulitzer Prize. It cemented the importance of the medium of photography. It is considered one of TIME magazine’s 100 most influential images of all time and is featured in the National Baseball Hall of Fame and the Smithsonian Institute.

Nat Fein’s Babe Bows Out is one of the most excellent images of baseball lore. 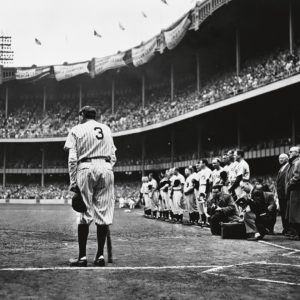