Signed and numbered from edition of 50 on recto.

Michael Kahn is an avid admirer of the ocean and sailing ships. While growing up and spending summers on the coast of Maine and Topsail Island, North Carolina, his infatuation with the sea and sailing captured his imagination and nurtured in the photographer, a desire to continuously use the subject as a source of inspiration and wonder. During his formative years, Michael Kahn began working at a photographic studio, learning from an early age the technical requirements to master all aspects of image making.

Michael Kahn’s masterful handling of film photography is evident and goes further than that of mere composition and lighting. Kahn’s passionate treatment of the subject matter creates a sense of belonging in each image. The photographer’s commitment and devotion results in photographs that truly celebrate the nautical seascape in detail;
“The sailing vessel is shaped of wood, to float on water, with sails of canvas to catch the winds, ropes of hemp and spars of spruce ballasted with stones, iron or lead, with fastenings forged of bronze. They are made from nature to work with nature.”

Kahn’s consideration of the analogous relationship between the sail and the sea become the “building blocks” of his photographic aesthetic. The photographer’s attentive gaze is able to capture light appearing as thin lines that separate ships and natural formations from bodies of water; blurring the texture of the different subjects in the image to the extent that they appear more as masterful soft pencil drawings by their delicate, precise, and considerate treatment of values. The ease by which the photographer is able to relay these affective qualities is apparent in his close history living and growing in a coastal environment and more pragmatically, the photographer’s length of experience working in photography and printing studios.

Kahn’s years of experience developed his skill and capability as a professional, going so far as to say that, “Through all of this training, I became extremely confident and comfortable using these mechanical cameras, to the point that their use became second nature to me. I no longer had to think about the camera, which allowed me to use it quickly and fluidly.”

Michael Kahn’s alluring photographs balance the harmony and mystery he creates in each reductivist image. The photographs are individualistic, they contain their own respective imagery and become starting points for engaging the viewer’s interpretations. Kahn captures a range of complex weather patterns, stemming from the serene and still in Connie or Three Dories to the ferocious in Hailstorm Cannes, that underscore the many battles with nature. The moods captured, as well as their dynamic elements, show a diversity but always a mastery in presenting a dramatic image. Kahn’s oeuvre become environmental statements about the natural balance of the sea. The photographs ultimately become meditations on the sea although in a broader sense are pictorial “reflections” on nature.

Michael Kahn’s methodology and interests are synergetic, his photographs and his passion for the nautical environment help to distinguish the images. One could argue that the photographer is capable of creating an image with a greater passion and personality than a classical draftsman, giving his work an impressive sense of confidence and concentration, creating some of the finest original sailing photographs in the genre. 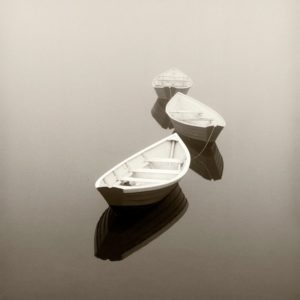