La Hija de Los Danzantes (The Daughter of the Dancers)

Bravo’s signature and “México,” in pencil, on verso.

In a seventy-five year career that spanned much of the 20th century and reflected numerous changes in artistic fashion, Manuel Álvarez Bravo produced deeply human, yet enigmatic photographs. He is now considered by many to be one of Mexico’s greatest artists developing a mysterious aesthetic with a strong capacity to intrigue.

Born in Mexico City in 1902, Álvarez Bravo spent his youth in the city where visible markers of its pre-Columbian past, its colonial vestiges, and its modernity all coexisted. Experimenting in different artistic media before settling on photography, his career began in the thriving artistic climate of post-revolutionary Mexico during the 1920s and 1930s. This was alongside such local artists as Diego Rivera and Frida Kahlo, and also photographers from abroad such as Paul Strand, Edward Westin, Tina Modotti, and Henri Cartier-Bresson. The various relationships and influences brought a strong modernist aesthetic to Álvarez Bravo’s photographs which he combined with a sense of the Mexican spirit.

Álvarez Bravo discovered complex ways to frame the disparity between urban and rural realities into a poetic vision of the nation’s modern life, its cultural differences, and social contradictions. His interest in Surrealist aesthetics is also reflected in the work through its symbolic and metaphoric messages. By 1933, these various strains would come together in one of his most celebrated images, “The Daughter of the Dancers (La hija de los danzantes).”

In this picture, as in much of Álvarez Bravo’s work, the focus is on looking. It asks what the girl sees or what she seeks in the concealed space. It also asks who the girl is that we see because her identity is concealed. The girl’s head is all but obscured by a wide-brimmed hat that echoes the shape of the portal, while her angled arms reflect the direction of the painted tiles. The geometric balance and unity of the composition illustrates the patience and thought that went into Álvarez Bravo’s photography of anonymous people engaged in ordinary, yet oftentimes inexplicable activities. It also illustrates the number of interpretations that could arise from his work.

Some suggest that the image may be a meditation on innocence: the girl in the white dress representing the virtue of childhood and the dark interior representing an unknown future that she is reaching towards. Álvarez Bravo’s meanings are only suggested and hints of deeper meaning are implied only cryptically through poetic titles. Because of this image’s title, “The Daughter of the Dancers (La hija de los danzantes)” it has also been thought that the girl’s awkwardly placed feet evokes the iconography of figures in pre-Columbian Mexican reliefs called “danzantes” which literally means “dancers.” The girl dressed in traditional Mexican costume may be representing a Mexico searching for its past by reaching through the window in the well-worn wall towards her roots in the darkness of history.

Because of Álvarez Bravo’s unique meld of modernism with traditional Mexican iconography, he was the first Latin American artist to enter the permanent collection of the Museum of Modern Art in New York City. Decades later in 1997, the museum held a full retrospective before he died at the age of 100 in 2002.

Today, the striking beauty of Álvarez Bravo’s photographs continues to make them compelling from the very first glance, but their enigmatic imagery invites longer looks and various readings. 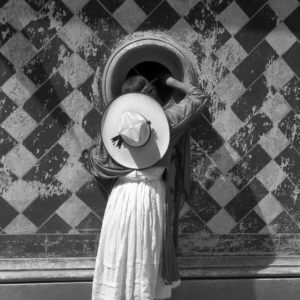