Signed, titled, dated and numbered from edition of 15 on recto

Having become renowned for his fresh and theatrical take on fashion photography, Jim Lee is the internationally known “original wild child of fashion photography.” He took photo shoots out of the rigid studios and placed them in a story context becoming a great pioneer of fashion photography who would change the course of the genre. His photography often seems inspired by his own life, his narratives having a strong relationship with the time they were created within, often encapsulating eras.

It didn’t matter that; as a photographer, I was not able to shoot moving images. I would construct my still images dynamically.”

Very much a product of its time and Lee’s strong visual narrative style, the mysteriously elegant photograph, Willy / Midget 2 from 1968 seems not that far from Swinging London. A woman driven to an atmospheric estate exits a sports car in a brilliant dress assisted by a midget chauffeur. The mystery about what exactly is occurring begs you to “reach beyond the frame” to know more.In fact, Jim Lee shot the photograph for designer Jean Muir who was well known in Swinging London at the time. The woman is Vogue model Maren Greve who is assisted by the three-foot tall acrobat and comedian Willy Shear, while the man driving the 1964 Ferrari was notorious playboy of the period, Julian Moulton. Not only does the photograph truly capture the England of the 1960s from the characters to the dress to the car, but also the actual photograph itself according to Lee was, “exposed perfectly! What’s particularly good is that it’s the color process of that time, it was a transparency / positive image and the color grading was the best you could get then.”

Willy / Midget 2 still resonates with viewers all of these years later exemplifying his timeless style. In His book arrested, Lee says, “I like to create striking – even shocking – images that make you read the story behind the picture. Images that make you see beyond the frame.” 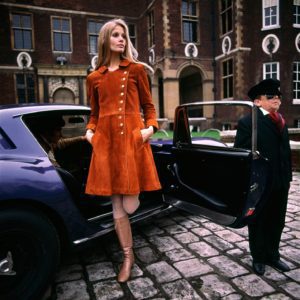