Renowned for his fresh and cinematic take on fashion beginning in the late 1960s, Jim Lee is internationally known as the “original wild child of fashion photography.” The British artist took photo shoots out of rigid studios and placed them in a story context becoming a great pioneer of the medium by changing the course of the genre. His striking and sometimes controversial photographic style centers on storytelling often involving complicated set-ups and ambitious outdoor productions yielding dramatic results.

Lee’s vibrant and stylish photograph, “Ossie Clark / Plane Crash / 1969” recalls the fashion of Swinging London and exemplifies Lee’s cinematic vision. The mystery about what exactly is occurring and how the image was created begs the viewer to “reach beyond the frame” to find out more. As Lee reveals about the shoot: “I photographed an Ossie Clark dress, which became known as the ‘Target Dress.’ The idea here was to believe that this girl had just gotten out of this plane having crashed it and survived she would simply brush off the dust and walk away unscathed. Although the photo came out brilliantly, the shoot for it went terribly wrong. I needed to set this photo up on a long lens: furthest away was the plane on its nose looking like it had just crashed; in the middle distance would be an explosion created by my friend Johnny; then nearest to the camera was Maria the model; and finally there was me shooting through these layers. Well, we synchronized the action – did it four times – and the fifth time before I was ready there was this almighty explosion…Unfortunately, Johnny misjudged the explosion setting it off too soon and was burnt, but luckily I got the shot on an earlier go.”

The deftly composed image inverts scale by compressing space, making the model and dress appear with an impactful presence in the foreground against the action in the background. The color palette artfully balances the vibrant yellow of the Ossie Clark design against the pastel blue sky and milky white of the clouds, while the yellow wildflowers and white smoke echo those elements. Highly innovative for the period, it is a picture that was made when fashion photographers were first experimenting with color. Along with the theatrical production, Jim Lee took these experiments to full advantage creating a picture unlike any that came before it. It was included in a retrospective for Ossie Clark, one of Britain’s most influential designers, at the Victoria & Albert Museum in 2004 and is now a part of the museum’s collection. The image shows Lee’s highly original approach especially as it still remains fresh and compelling to viewers all these years later. 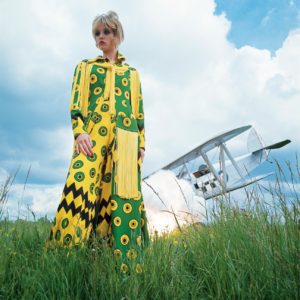