Copyright credit blindstamp in the margin; signed, titled, dated, and edition # 18/25 in pencil on the verso.

Through his distinctive style and composition, Herb Ritts became one of the leading photographers to emerge during the 1980s. Ritts’s intimate sense of portraiture, his innovative approach to fashion, and his updated classical treatment of the nude that won him international acclaim and a place within the canon of American photography.

His original aesthetic became a characteristic style that embodied facets of a fresh outdoor life of leisure in Southern California differentiating him from his East Coast peers still predominantly doing studio work. Ritts made use of bright California sunlight during his outdoors shoots making use of what he called the “golden hour,” a brief period of unique light just before dawn or dusk that also produces bold contrasts by casting strong shadows. Within this environment, he would celebrate the myriad shapes and textures of the human form. Ritts’s eye was drawn to clean, pure lines and strong, simple shapes while having a fondness for elegant compositions that often emphasized balance and the order of classical style.

Perhaps nowhere was this better demonstrated than in Ritts’s work in the genre of the nude. Herb Ritts, along with contemporaries Robert Mapplethorpe and Bruce Weber, provoked a radical change during the 1980s in the depiction of the male nude. The genre would become viable as both celebrated fine art and for commercial work finally appealing to a wide audience alongside images of the female form. Ritts’s particular strength in the genre stemmed from his ability to analyze the male body from a variety of angles and create compositions that abstracted the male physique in ways that communicated strength and poise along with an overriding feeling of athleticism and nobility imbued in the male subjects.

The 1986 image, “Tony – Black Torso” taken in Los Angeles during one of Ritts’s first personal, art shoots is an early example of what would come to define his work. Ritts met the model Tony Ward on a commercial shoot and Ward would frequently appear in early pictures in which a kind of free collaboration would occur allowing Ritts to develop his style. In the dramatically lit and elegantly posed composition, Ritts never fully reveals Ward’s face, thus transforming and abstracting into pure photographic form. The body is depicted as an isolated interpretation of classical sculpture through the dried paint on his skin shining in response to the natural light much as marble would. Ritts would often evoke the tactile appeal of surface textures, and in particular beautiful skin, by often adding paint, sand, fabrics, light, shadow, and other attributes to sensually emphasize the surface of a body and its form. 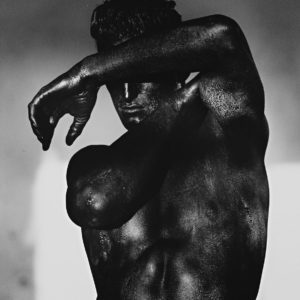