In early 1930s Paris, two individuals met who would come to define not only the fashion photography of the era, but who would also leave an indelible mark on the course of the entire medium. The mentorship between George Hoyningen-Huene and the younger Horst P. Horst would result in seminal images and a style that would influence countless photographers who followed.

George Hoyningen-Huene was born in St. Petersburg in 1900, the son of an aristocratic Russian father and American mother. Later fleeing the Russian Revolution, the family would eventually settle in Paris where Huene would emerge among Vogue’s first celebrated image-makers as the principal of photography in 1925. His images dominated French Vogue’s pages at the turn of the decade, and positioned him as an arbiter of taste in the cultural capital. Horst P. Horst’s journey from Germany to Paris around 1930 was triggered by his choice of architecture as his initial discipline, resulting in a position at Le Corbusier’s studio. Serendipitous connections and Horst’s charms would see him introduced to Huene who would spark a passion for photography that would overshadow the other discipline. Their relationship led to lessons with the camera for Horst and an opportunity to hone his own skills in the photographic studio of French Vogue. “It was from him,” Horst acknowledged, “that I learned everything he could teach me about photography.”

Horst’s initial experience with photography through Huene was as an athletic, winsome model enacting elegantly stylized Olympian poses. The most arresting of these early 1930s images is a close-cropped, half-figure study photographed on the Vogue studio’s roof when Horst was 24 years old. Capturing him at a low eye level in a heroic pose, Huene shows Horst in bright sunlight as he shields his brow creating a type of frame with his arms as he clutches a vertical javelin. Clearly referencing classical statuary and emphasizing an ideal physique that resonated particularly during the era, the model is dramatically lit with a low, strong daylight rendering a sculptural sense of volume and three-dimensionality. Humanizing the image is Horst’s own air of tranquility, revealed through a stunning contrast of light and shadow across his relaxed face. Horst later recalled, “We had tried to duplicate the lighting of the Acropolis at sunset. Both George and I had this extraordinary feeling about Greece. The physical beauty of the men and women, the sun and the fresh air and the sea.”

Horst’s early admiration for the classical world as well as an instinct for formal clarity and a profound appreciation of how light can animate its subject was instilled in him by Huene and became a constant throughout Horst’s own subsequent illustrious photography career. By the time of Huene’s departure from Paris in 1934 to take the lead at American Vogue, Horst was ready to follow in his mentor’s footsteps becoming principal photographer for French Vogue. Upon Huene’s death in 1968, Horst inherited his estate and supervised the printing out of a small number of expressive silver prints as well as luminous platinum palladium photographs of the “Horst Torso.” The “Horst Torso” was one of the earliest classic photographs that concentrated on the male form – and Huene would go on to be the first fine art fashion photographer who used male models in his work. Today this timeless image remains a testament to classic idealized beauty as well as photography’s expressive use of shadow and light. 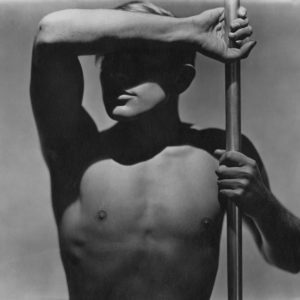