Signed, titled and dated in pencil on artist’s label on verso.

Having created an informal and ironic photographic style that is uniquely his own, Elliott Erwitt became renowned as an uncanny observer of humanity and the human condition. Known for his wry sense of humor, he has been nicknamed “Erwitt the Wit” whose photographs evoke everything from ironic smiles to outright laughter with his visual puns. Being highly sensitive and perceptive to the visible surprises in life, Erwitt possesses a deep appreciation of the moment and is skillful at capturing it.

Early in his career, as a young Magnum photographer, he recorded many of the 20th century’s most important events and people such as Marilyn Monroe, Nikita Khrushchev, Richard Nixon, and Che Guevara. He is now perhaps best known for his photographs of small moments in ordinary life that have become classics over the years.

Erwit has said, “If your subjects are eternal, they’ll survive. If they’re not dated, they will survive” Some of his most enduring images are of everyday moments lit up by flashes of passion and absurdity such as his distinctively original take on the Eiffel Tower.

Erwitt’s time spent in Paris has been immortalized through the images taken by the passionate observer. He possesses a keen eye for the real city observing both the familiar aspects of Paris as well as its private hidden charms, often alternating grand scenes with intimate comic details. Erwitt’s Umbrella Jump captures the world’s most romanticized landmark during its 100th anniversary in 1989.

He cleverly avoids the time worn and predictable postcard image and reproduces it with an original vision. In the rain, a silhouetted man with a fully open umbrella leaps exuberantly across a puddle in the Trocadero appearing to almost collide with two silhouetted lovers, their own wrecked umbrellas blown inside out by the Parisian wind. The crisp and clear three large silhouetted characters are reduced to their essential shapes while the similarly outlined tiny figures in the background echo one another across each side of the frame.

The image pays a witty homage to fellow Magnum photographer Henri Cartier-Bresson’s own iconic “decisive moment” picture, Behind the Gare St. Lazare. Now Erwitt has made it his own “delightful moment” photograph. He has charmingly reinvented romantic feelings in a powerful black and white image that expresses the reality of Paris with the rain, the wind, the mist, and of course, the lovers. The freshness and the vitality of the picture imbue Umbrella Jump with a witty life of its own creating a unique tribute to the city. 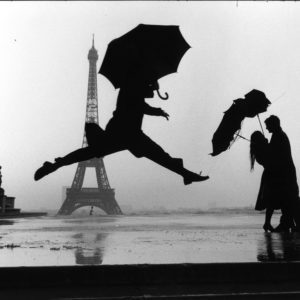