View cart “Hoof It, Amboseli, Kenya” has been added to your cart.
← PREV
NEXT →

The Richest Hill in the World, Montana USA

When we undertook our first “through the car windscreen” project 18 months ago in Monument Valley, Arizona, we had no idea that it would be the pilot to a series that has now taken us onto Montana, Chicago and LA. The idea of a layered narrative using great American vistas has worked and the concept is now known. Best of all no one can really copy us.

In January 2020 we returned again to Montana, partly because the four wolves we use live there, partly because we have a network of local contacts and fixers that deliver both logistical precision on the ground and access to the best locations, but mostly because the canvas on which to tell stories is so rich in potential. Montana does stand out for us.

Our focus this time was the historic frontier mining town of Butte. I have long had an obsession with the frontier settlements and Butte is visually one of the best because it straddles a hill. Between 1900 – 1950 the town represented a microcosm of final frontier life in the Wild West. It was a hill that was once so rich in minerals, that Butte became known locally as “The Richest Hill in the World”.

My readings on the town told me of a storied past of felons and outlaws – there were both murders and hangings on a regular basis. There were also no doubt many honourable men, but also many with the cunning of a wolf. It was a rich place and as always with that wealth came glamourous women.

In my creative processing, coupling a wolf with the glamour of Daniela Braga could give a nod to the hill’s heyday when everything was possible for everyone. The photograph just works and for those that know, it is unmistakably Butte in the background. – David Yarrow 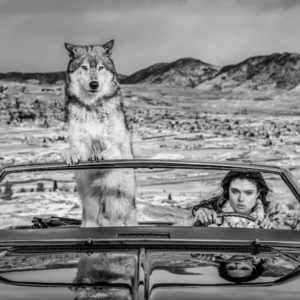