Signed, dated and numbered from edition of 12 on recto. Signed, titled, dated, and numbered on certificate of authenticity. Frame: 71 x 89 inches

“Route 66 – The Mother Road – will always be a symbol of America’s post-war freedom and geographical mobility.

It evokes imagery of roadside motels, diners and 1950s Cadillacs. America is the home of the road trip and Route 66 is its poster child.

Much of the road that ran from Santa Monica through California, Arizona, New Mexico and then north to Chicago has either disappeared or been supplanted by interstate highways, but good sections of it do remain, as do the towns that grew up servicing the needs of those on the road.

In the autumn of 2022, I scouted for shooting locations in California and Arizona that would emphatically offer a Route 66 vibe and I found it to be a challenge. So many of the motels and diners along the route are either abandoned or worse still have become rather kitsch tourist attractions. To find a set that was both authentic and operational seemed mutually exclusive.

But then I stumbled across the town of Holbrook – 100 miles east of Flagstaff in Arizona. There are some real

gems in this small town and none more so than the Wigwam Motel that saddles up right next to Route 66.

We went to see the owner – a charming man called Clifton Lewis – and he agreed to allow us to film in the courtyard outside the reception. It was ideal for what we were looking for.

The Wigwam Motel is still operational and was fully occupied the night of the shoot, so some of us stayed in a properly rundown motel around the corner. My room rate was $56 which

I felt was perhaps $50 too expensive. But it was all so worth it. Holbrook is as good a canvas on which to tell a Route 66 story as I know; to drive through sections of the old town is to go back 60 years.

I chose Josie Canseco as the lead on this project as I knew she could wear a glamorous 1950s vibe very well. I was right and this photograph is as good as I could have imagined when I started exploring the creative concept.

Have you slept in a Wigwam lately?” – David Yarrow 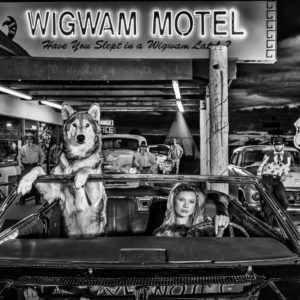