View cart “Frontier Town, Butte, Montana, USA” has been added to your cart.
← PREV
NEXT →

I have always been drawn to the John Ford scenery of Northern Arizona and Utah, the highlight of which has to be Monument Valley. I am clearly not alone in considering the view south from turnoff 13 on the way to Mexican Hat to be one of the most visually intoxicating sights in the US. It was, of course, used in Forrest Gump and then provided the front cover to Ridley Scott’s Thelma and Louise. The US has taken ownership of the term “road trip” as explained succinctly by this stretch of tarmac. It’s truly an iconic and timeless vista that shouts “The Wild West”.

Gladiator is probably Ridley Scott’s finest movie and I have watched it over and over again. Meanwhile, Thelma and Louise is rightly one of the most lauded road trip movies of all time. About a month ago, I picked up the DVD box and had a moment of inspiration. Their use of the convertible car and the head on angle offered a totally different perspective on Monument Valley.

Taking my pre-conception through to reality that Wednesday morning was no small task. I want to thank Brawler Productions in LA for collaborating with me and helping secure exclusive use of the road at the key time, around 7.40 am. It’s a busy road and the Utah State Police were fantastic. Josie Canseco played her role brilliantly – it was not easy to look that glamorous and in charge with a wolf sitting in Thelma’s seat. It is no surprise that Victoria’s Secret has booked her for its latest show in NYC.

We arrived on site two days before the shoot as we wanted to be in control of everything within our control. I can’t remember ever pondering more over camera settings and lenses. I knew I would have a generous amount of light to play with at 7.40 and we had to use it well. The big variable was the wolf’s behaviour – the light gets too harsh from about 8am and therefore there was only a small window to get the job wrapped. It was tight, but we did it. All in all, it was a great team effort in a fairly remote part of the American West.

When we showed this picture for the first time in late September the reaction was huge. It is a very special image and I think we nailed it. Thank you, Josie, you were fabulous. – David Yarrow 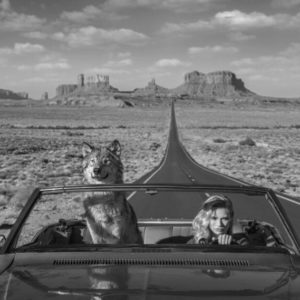